A Palestinian youth has been shot dead by Israeli forces during a protest in Jerusalem, Palestinian medical sources said.

Ahmad Bitawi, the director of Ramallah hospital in the West Bank, said Wissam Jamal arrived at the hospital with a bullet wound to the chest after Thursday’s clashes at Shuafat refugee camp in Jerusalem.

Israeli police spokeswoman Luba Samri says Israeli troops had gone to search the home of a Palestinian involved in an earlier attack. She said they were confronted by thousands of rioters who hurled stones and firebombs at them.

Jamal’s death came as the UN human rights chief, Zeid Raad al-Hussein, called for calm in the West Bank after a week of violence in the occupied territory, as well as occupied East Jerusalem, and inside Israel.

Hussein warned that “more bloodshed will only lead to more hatred on both sides,” and that he is deeply concerned about the increasing number of attacks by both settlers and Palestinians.

The UN official voiced concern about the number of Palestinians injured by live ammunition, which stands at 134, and the hundreds more injured by rubber bullets and tear gas.

“The high number of casualties, in particular those resulting from the use of live ammunition by Israeli security forces, raise concerns of excessive use of force,” Hussein said, according to the Associated Press news agency.

Over the past week, four Israelis have been killed along with seven Palestinians, four of them after alleged attacks on Israelis.

Eighty-seven have been injured with live ammunition, and 290 with rubber-coated steel bullets.

On Monday, Abdel Rahman Abdullah, a 13-year-old from the Aida refugee camp in Bethlehem, was shot and killed by Israeli forces, prompting further protests and unrest.

On Wednesday, two Palestinian protesters were shot and critically wounded by Israeli soldiers during a protest near the settlement of Beit El.

The incidents are the latest in a series of attacks, sparked by tensions over what Palestinians believe is Israeli encroachment of their holiest site in Jerusalem, the al-Aqsa Mosque.

On Wednesday evening, Netanyahu issued an order banning his ministers from visiting the sacred site.

Jews are prohibited from visiting the site, they call the Temple Mount, by Israel’s rabbinate, but hardliners have challenged the restriction.

Their visits to the al-Aqsa compound happen under heavy police protection, and are seen as provocative by Palestinians.

Palestinian worshippers fear the visits are the first stage in an eventual plan to partition the site. 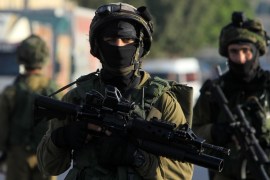 Palestinian officials warn that the Israeli government is exploiting a volatile situation to derail peace prospects.