The rare comment by the sultans of nine states and governors of the remaining four came in a statement issued late on Wednesday, saying the government’s failure to give convincing answers on 1MDB may have resulted in a “crisis of confidence”.

The fund, whose advisory board is chaired by Najib Razak, Malaysia’s prime minister, has amassed a debt of more than $11bn.

1MDB has denied all allegations of wrongdoing.

Investigations being conducted by Malaysia’s anti-corruption agency and other organisations have dragged on with no conclusion in sight.

“The findings of the investigation must be reported comprehensively and in a transparent manner so that the people will be convinced of the sincerity of the government which shall not at all conceal facts and the truth,” the rulers said, according to a report in the Bernama state news agency.

The comments, which come before a two-day gathering of the Conference of Rulers starting on Wednesday, are unprecedented as the sultans assume a non-political role in Malaysia and rarely speak on the functioning of the state.

The remarks add to pressure on Najib, who is facing calls to step down over his alleged involvement in the 1MDB scandal from opposition parties and some establishment figures, including Mahathir Mohamad, the former prime minister.

In July, the Wall Street Journal reported that investigators looking into 1MDB had identified a payment of nearly $700m into a bank account under Najib’s name.

Najib has denied taking any money for personal gain and the government has said the deposit was a private donation.

In the weeks that followed, the government replaced the attorney general, who had led investigations into 1MDB, and a parliamentary committee inquiry has stalled. 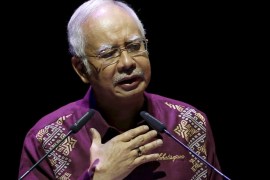 Opposition group calls for PM Najib Razak to quit, arguing he “grossly abused his powers” in a corruption scandal. 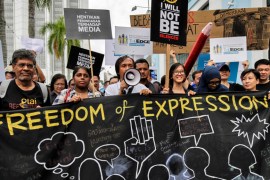 Controlling the message in restive Malaysia

Recent mass protests have raised concerns of a further clamping down on media reporting and free speech.