Afghan forces who said they were under Taliban fire asked for the US air strike that killed 22 people at a hospital in Kunduz, the US commander in Afghanistan has said.

“An air strike was then called to eliminate the Taliban threat and several civilians were accidentally struck,” General John Campbell said on Monday at a press conference at the Pentagon.

The general declined to comment on the rules under which the US forces were operating, but he promised a thorough and transparent investigation and pledged: “We’ll hold those responsible accountable and take steps to ensure mistakes are not repeated”.

Doctors Without Borders (MSF) has questioned the US version of events leading up to the bombing and called for an independent probe.

“Their description of the attack keeps changing—from collateral damage, to a tragic incident, to now attempting to pass responsibility to the Afghanistan government,” Christopher Stokes, general director of MSF, said in a statement.

“There can be no justification for this horrible attack. With such constant discrepancies in the US and Afghan accounts of what happened, the need for a full transparent, independent investigation is ever more critical.”

The US military had previously reported that its own troops were under fire and had called in the strike, which was carried out by an AC-130 gunship.

Al Jazeera’s Rosiland Jordan, reporting from Washington, said that the incident has become a “black eye for the US military”.

“General Campbell speaking before a group of very opinionated Senators is going to find a way to satisfy their questions: one, about the Afghan army’s capabilities, and two, about whether US military was following its rules of engagement.”

MSF said on Sunday that it had closed the hospital in Kunduz, seen as a lifeline in a war-battered region with scant medical care.

The medical charity said that despite frantic calls to military officials in Kabul and Washington, the hospital was “repeatedly, very precisely” hit for more than an hour.

The US has been under intense international pressure after global outrage in the wake of the deadly incident that was dubbed possible war crime by the UN human rights body.

The White House said on Monday that the attack was “a profound tragedy”.

White House spokesman Josh Earnest said the United States goes to great lengths to avoid civilian casualties and there were three current investigations into the incident.

UN chief Ban Ki-moon has condemned the attack and called for an impartial investigation into the incident.

MSF’s Stokes also hit out at claims by Afghan officials that insurgents were using the hospital as a position to target Afghan forces and civilians.

“These statements imply that Afghan and US forces working together decided to raze to the ground a fully functioning hospital with more than 180 staff and patients inside because they claim that members of the Taliban were present,” he said.

“This amounts to an admission of a war crime. This utterly contradicts the initial attempts of the US government to minimise the attack as ‘collateral damage’.”

The group said Afghan and coalition troops were fully aware of the exact location of the hospital, having been given GPS coordinates of the facility, which had been providing care for four years.

President Barack Obama promised a full investigation while US Defense Secretary Ashton Carter, who expressed sadness over the “tragic loss of life”, warned that the investigation will not be swift.

Dead bodies in the streets

The air raid came five days after Taliban fighters seized control of the strategic northern city of Kunduz, in their most spectacular victory since being toppled from power by a US-led coalition in 2001.

On Monday, Afghan forces, backed up by their NATO allies, claimed to have wrestled back control of the city, where decomposing bodies still littered the streets.

“There are many dead bodies in the streets. Local residents are busy burying the bodies,” Al Jazeera’s Qais Azimy, reporting from Puli Khumri in neighbouring Baghlan province, said.

He said that some shops in the centre of Kunduz city opened on Monday for the first time since it fell to Taliban fighters a week ago.

Although government forces control most of the city, Taliban fighters “are still hiding in residential areas on the outskirts of the city” and in the city “in some houses”, the Al Jazeera correspondent said.

In addition to conducting house-to-house searches in the city, government forces have surrounded the outskirts of the city, where they will engage Taliban fighters in order to “avoid civilian casualties” in residential areas, he said. 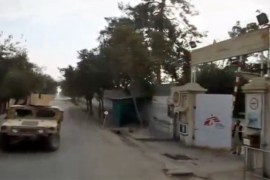 Probe continues after apparent US air raids hit hospital run by Doctors Without Borders, as death toll rises to 23.

US president offers “deepest condolences” for apparent US bombing of MSF-run hospital in Kunduz that killed 19 people.

UN rights chief says air strike on MSF hospital that killed 19 is “inexcusable” as US president extends his condolences.