Afghan government forces have regained control of most of the besieged city of Kunduz, according to police and residents.

Al Jazeera’s Qais Azimy, reporting from Puli Khumri in neighbouring Baghlan province, said some shops in the centre of Kunduz city opened on Monday for the first time since it fell to Taliban fighters a week ago.

Residents said it was the first time in eight days that they had not heard gun battles and were able to leave their homes to buy food and take stock of the damage done.

But the fighting in Kunduz city, the capital of Kunduz province, has taken a heavy toll on civilians.

“They were living under heavy fighting during the past week – no water, no food and no electricity,” our correspondent said.

“There are many dead bodies in the streets. Local residents are busy burying the bodies.”

Although government forces control most of the city, Taliban fighters “are still hiding in residential areas on the outskirts of the city” and in the city “in some houses”, he said.

In addition to conducting house-to-house searches in the city, government forces have surrounded the outskirts of the city, where they will engage Taliban fighters in order to “avoid civilian casualties” in residential areas, he said.

The US government said it was investigating whether its military was responsible for an air strike that killed 22 people in an Afghan hospital run by the aid group Doctors Without Borders (MSF) on Saturday.

The UN human rights chief has described the hospital incident was “inexcusable” and could amount to a war crime.

The US military said it conducted an air strike “in the vicinity” of the MSF hospital as it targeted Taliban fighters who were directly firing on US military personnel.

It has not acknowledged hitting the hospital.

Any confirmation of US responsibility for the hospital deaths would deal a blow to Afghan President Ashraf Ghani’s policy of forging closer ties with the US.

Although doctors have arrived in Kunduz to help cope with the looming humanitarian crisis, Al Jazeera’s Azimy said they are refusing to work in the main hospital due to fears that it may be hit by another air strike.

“They are providing treatment at another medical centre instead,” he said, adding that fighting between government forces and the Taliban is ongoing in the city’s outskirts.

Residents tell of suffering as battle for Kunduz rages

Families unable to bury dead and parents abandoned as army and Taliban fight for control of northern Afghan city. 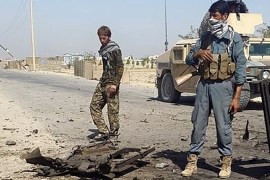