US President Barack Obama has said that the US has “become numb” to mass shootings like the latest incident in the state of Oregon, where a 26-year-old gunman killed at least nine people at a community college.

Obama issued the statement as local and federal investigators struggled on Friday to determine a motive of the shooting at Umpqua Community College.

“We are the only advanced country on earth that sees these kinds of mass shootings every few months,” Obama said, adding that something needs to be done to stop the recurring deadly incident.

He said late on Thursday that the nation’s response to mass shootings has become “routine” – from the reporting by the media, to his own comments, to the opposition to gun control laws aimed at deterring the violence.

On Friday, law enforcement sources confirmed reports identifying the suspect as Chris Harper-Mercer, 26, who lived with his mother in a town near the college campus, where the shooting took place.

Mercer’s motives remained unclear. But an unnamed law enforcement officer told the New York Times that “he appears to be an angry young man who was very filled with hate”.

Investigators also said the gunman had body armour, six weapons including a 9mm Glock pistol and a .40-calibre Smith and Wesson, and additional magazines of bullets. They also recovered seven other firearms in his apartment.

The gunman stormed into a classroom at the college in the former timber town, shot a professor at point-blank range, then ordered cowering students to stand up and state their religion before he shot them one by one, according to survivors’ accounts.

The violence, the latest in a series of high-profile mass killings across the country, has fuelled demands for stricter gun control in the US.

Student Cassandra Welding was in a classroom when she heard 35 to 40 shots coming from an adjacent room.

She saw a fellow student shot after opening the classroom door to check what was happening.

“Then we locked the doors, turned off the lights and … we were all pretty much in panic mode and called 911 [emergency services] and our parents and [said] ‘I love yous’ because we didn’t know what would happen – if those were our last words.”

‘We have become numb’

Voicing both anger and sadness at the latest mass shooting at a US school, Obama threw down the gauntlet to politicians and voters on the thorny issue of gun control.

“It cannot be this easy for somebody who wants to inflict harm on other people to get his or her hands on a gun.”

Douglas County Sheriff John Hanlin said police were alerted to the shooting shortly after 10:30am and rushed to the site where two officers exchanged fire with the gunman who was later confirmed dead.

Authorities said investigators were examining social media postings thought to belong to the shooter. Several reports said he may have shared his intentions online beforehand.

Other reports said police recovered three handguns and an assault rifle at the scene, along with a cell phone that presumably belonged to the shooter who wore a bulletproof vest.

Hanlin confirmed that authorities had identified the gunman, but declined to release his name.

A candlelit vigil was held late Thursday for the victims in Roseburg, a close-knit logging community with many locals among the 3,300 students at the college.

Police searched the entire campus after the shooting aided by sniffer dogs and patted down students and staff as they left and boarded buses that transported them to local fairgrounds.

“Most of us have relatives taking classes here,” said Douglas County fire marshall Ray Shoufler. “Pretty much everybody knows everybody type scenario.

“So something like this affects many, many, many people.”

School shootings are a disturbing reality of American life and many facilities have reinforced security in recent years, especially in the wake of the Sandy Hook massacre in 2012.

Twenty students and six adults were killed at the Sandy Hook Elementary School in Connecticut by 20-year-old Adam Lanza.

On Wednesday, a student who got into an argument with the principal at a high school in South Dakota pulled a gun and shot the school official in the arm before he was tackled and subdued by staff.

There have been 142 school shootings in the US since the Sandy Hook massacre, according to data compiled by Mass Shooting Tracker. 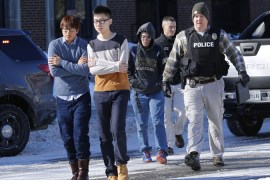 Fatal shooting on US university campus 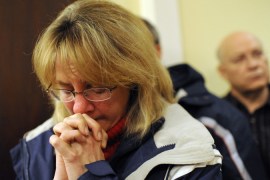 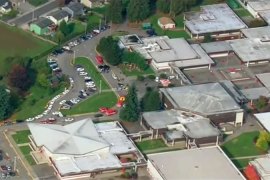 Police says shooter killed himself after opening fire in school north of Seattle, killing one and injuring others.