Eleven people have been killed in a crash of a US military transport aircraft at an airport in eastern Afghanistan, a US military spokesman has said.

The crew of six US military service members were among the dead, along with another five passengers, civilians who were contracted employees of the US-led international force, the spokesman said.

The incident took place at around midnight (19:30 GMT) on Thursday at Jalalabad airport.

The army spokesman said that there were no reports of enemy fire at the time and the incident was under investigation, however, the Taliban claimed it had shot down the aircraft.

The contractors had been working for Resolute Support, the NATO-led training mission.

The C-130 Hercules, a cargo plane built by Lockheed Martin, is powered by four turboprop engines and is used extensively by the military to ship troops and heavy gear.

The aircraft can take off and land on rough, dirt strips and is widely used by the US military in hostile areas.

Jalalabad is located near the border with Pakistan.

Most NATO combat troops pulled out of Afghanistan last year, but a small contingent remains, including roughly 10,000 US soldiers.

The US soldiers, along with other NATO troops and private contractors, are focusing on training Afghanistan’s national security forces.

The crash comes with Afghan forces battling the Taliban which has blighted the country since the 2001 US-led invasion of Afghanistan.

The Taliban’s recent advances in the city of Kunduz and neighbouring Takhar and Baghlan provinces highlight that a large and strategic patch of northern Afghanistan is imperilled by a rapidly expanding battlefield.

It is also seen as a game-changer for the fractious armed movement that has been dogged by a leadership crisis since the announcement in July of founder Mullah Omar’s death. 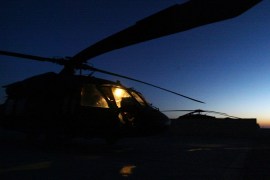 US helicopter crashes in Afghanistan

US Army Black Hawk believed to be carrying four people went down while on a night mission.