In September 2014, 17-year-old Nel Pernecita entered a dry underground pit in the northeastern Philippine province of Camarines Norte, to mine ore containing gold.

To reach underground, miners like Nel are lowered on a rope into a pit that could be as deep as 25 metres.

For several hours, they work there digging rocks, taking only short breaks to eat. If the pits are deep, oxygen is pumped in with a blower, allowing workers to breathe. In shallower pits, miners work without a blower.

On a good day, Nel and labourers like him are paid a few dollars to find the precious metal currently valued at $1,127 an ounce in the world market. In 2014, 18 tonnes of gold worth $700m was produced in the Philippines, according to government records.

But Nel never got to collect his pay that day. The boy died of suffocation underground. His older brother Joven tried to rescue him. When both failed to surface, a third brother entered the mine and found them both dead.

When asked why a minor like Nel was allowed to work, his employer reportedly said that he accepts children as workers, because, “I don’t meddle in what they do.”

Under Philippine labour laws, hazardous work including mining underground and underwater is prohibited for anyone under 18. But a new report by Human Rights Watch revealed that the government of President Benigno Aquino “is failing to protect children” forced by poverty into the small-scale gold mining industry.

“The Philippine government prohibits dangerous child labour but has done very little to enforce the law.”

Reacting to the report, the government said, “The fight to save our children from the menace of child labour and its worst forms is continuing, and it is our responsibility to win the war for the sake of our children.

“We have made progress in taking action to solve this complex and deeply-rooted problem.”

The Philippines is the world’s 20th largest gold producer, employing 200,000 to 300,000 people in the country’s small-scale gold mines alone. A 2009 study conducted by the International Labour Organization said 18,000 boys and girls work in mining.

In the latest report released a month ahead of the Philippines’ National Children’s Month in November, Human Rights Watch interviewed dozens of child labourers, who recounted their plight working as miners.

Child labour is a product of poverty. Therefore, the government should provide poor vulnerable families with support to enable them to send their children to school.

One of the most dangerous mining practices recorded by the rights group is known as underwater compressor mining. It is a practice in the Philippines, where many of the gold deposits are beneath the water table.

In the coastal town of Panganiban in the island province of Catanduanes, the group found seven boys and three young adults, who started work as children, mining ore.

The children dive underwater for several hours in 10-metre-deep shafts dug into the bottom of the sea or river. They receive air from a tube attached to a diesel-run air compressor at the surface.

“I felt scared because it’s dark and deep, and it was my first time … Now I’m used to it,” he told Human Rights Watch.

Those who dive for gold also face the risk of drowning from lack of oxygen or mudslides. In some cases, the compressor tubes providing divers with oxygen stopped working and forced them to come up for air quickly.

However, coming up fast from diving deep in the water is also dangerous, according to Carlos Conde, the Human Rights Watch representative in the Philippines, who was involved in interviewing the children.

He said that aside from reported cases of drowning, underwater compressor mining has also been known to cause decompression sickness resulting in joint pain and brain disorders. The children are also vulnerable to skin disease from the bacteria underwater.

In March 2015, the Philippine government prohibited the underwater mining practise. But as the rights group said, it remains an important livelihood is some areas of the Philippines.

One of the children working with mercury was 13-year-old Ruth from another village on the island of Catanduanes. She told Human Rights Watch that she processes gold to support her parents. She dropped out of school at nine and started working, processing gold.

Michelle, 15, from a town in Camarines Norte also worked part-time processing gold. When she is off from work, she attends an alternative school set up for children in mining villages. She earns $7 to $11 a day panning gold.

“Child labour is a product of poverty. Therefore, the government should provide poor vulnerable families with support to enable them to send their children to school,” said Conde.

But there is an even more hidden danger of mining: mercury poisoning, according to Conde.

Mercury is a poisonous chemical element used by small-scale miners to separate gold from the ore. Prolonged exposure to mercury could cause lifelong disability and brain damage.

In the mining village of Malaya, in Camarines Norte, mercury tailings from gold processing flow directly to the river where children play, according to Conde.

Elmer Billedo, a top official at the Philippines Mines and Geosciences Bureau, said it is impossible to monitor all the small-scale gold mining activities in the country, especially those who are employing children.

“We have a very limited number of technical personnel, and of course, we cannot afford to stay overnight or even monitor all the activities of one small area,” Billedo told Human Rights Watch.

Human Rights Watch has urged the Philippines to introduce mercury-free gold processing, to reduce the threat to all children.

It also urged the country’s central bank, which is the official buying agent for gold from small-scale mining, to check conditions in which gold has been mined. 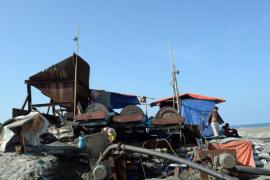 Deadly attacks on anti-mining activists in the Philippines part of a global trend, according to new report. 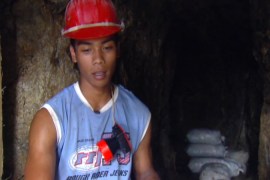