A fresh explosion has targeted another residential building in southern Chinese town of Liucheng after more than a dozen parcel bomb attacks hit the same district.

The series of attacks on hospitals, banks and other sites in Guangxi region that killed at least seven people and wounded more than 50 others were part of a “revenge” campaign, according to the Chinese police that ruled out a “terrorist act”.

A 33-year-old local suspect had been arrested, authorities said, providing no immediate explanation regarding a possible motive.

Thursday’s blast in the six-storey building, near a local highway administrative bureau in Liucheng, caused “some damage”, according to local media reports.

There were no injuries immediately reported, according to China National Radio’s blog site CRI.

The radio station quoted a local resident who said he was shaken awake by the blast and “thought there was an earthquake”.

Earlier bombs in express delivery packages went off on Wednesday at multiple locations in Liucheng county, including government offices, a prison, a train station and a shopping centre among others.

Wednesday’s explosions came on the eve of China’s national day, the start of a week-long holiday during which many government offices and businesses close.

In recent years, several disgruntled Chinese citizens have bombed local government offices and public places to try to draw attention to their grievances.

In 2013 a man set off a series of home-made bombs packed with ball bearings outside a provincial government headquarters in northern China, killing at least one person and wounding eight.

Xinhua said at the time he sought to “take revenge on society”.

Liucheng, near the Vietnam border is home to about 400,000 people and is one of China’s poorest regions. 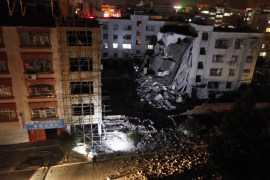 Bombs have been detonated in at least 15 public places, including schools, shopping malls and prisons.