The auction of a collection of DNA-inspired sculptures in London has raised over $370,000 for research into major human diseases.

The 21 giant sculptures, inspired by the DNA double helix, were put up for sale at auction house, Christie’s, after spending the last two months installed in iconic locations such as Trafalgar Square, Parliament Square, and St Paul’s Cathedral.

Two sculptures by Chinese artist Ai Weiwei were bought for a total of $93,000.

The exhibition was arranged in support of one of Britain’s largest charities, Cancer Research UK, and the proceeds of the auction of the sculptures will go towards a new research institute focused on tackling human diseases.

The $1bn Francis Crick Institute – named after one of the scientists who discovered the structure of DNA – is due to open in London next year.

“We want to bring together 1,200 of the world’s very best scientists, all under one roof,” says Sam Godfrey, from Cancer Research UK.

“Together, they are going to collaborate and work together to beat not just cancer, but all major human disease. We’ve got a real chance of revolutionising medical science.”

The charity had asked leading artists and designers like Ian Callum, the director of design at carmaker Jaguar, to decorate the works. British graphic artist Darren Baker was among them.

“The concept there is to show humanity coming together, and with that, we can create a force for good and help fight diseases and help humanity as a whole,” he says.

Another design, created by British clothing company Ted Baker, covered the helix with a cascade of pearlescent buttons. Many of the sculptures explored the links between art and science. 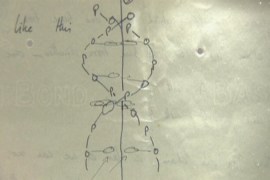 One of the most important discoveries in scientific history was made 60 years ago, changing our understanding of life. 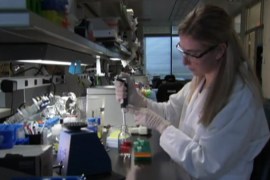 Biggest breakthrough reported in science’s understanding of DNA since the genome was mapped in 2003. 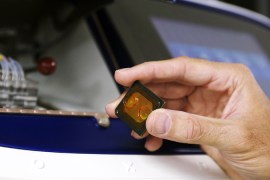 Seen as an exceptional advance that can change medicine, the “$1,000 genome” is just around the corner.