The son of Kenya’s main opposition leader Raila Odinga was found dead in his home near Nairobi, prompting a police investigation and minor unrest in the capital, police and media reports say.

Police said Fidel Castro Odinga, 41, who was seen by political observers as a potential successor to his father, returned home on Saturday night after an evening out drinking with friends and was found dead in his bed on Sunday.

“The death … is being treated as unexplained. We are investigating his final movements. A forensic pathologist has been called in and a post-mortem will be conducted to establish the cause of death,” a Kenyan detective said on condition he not be named.

Odinga, a former prime minister, leads the opposition Coalition for Reforms and Democracy (CORD) and is an outspoken critic of Kenyatta’s government.

Last month he spearheaded a challenge of controversial anti-terror laws, accusing Kenyatta of turning Kenya into a dictatorship.

The newspaper said the protesters pelted motorists with stones and blocked the roads before being dispersed by police. 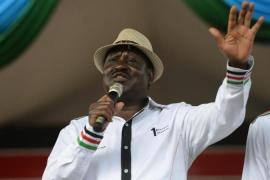