Baghdad, Iraq – The Iraqi prime minister has pledged an urgent investigation into accounts that Iraqi security forces and Shia militias gunned down dozens of unarmed villagers after fighting with the Islamic State of Iraq and the Levant (ISIL) group.

“The prime minister has ordered an investigation and we are waiting for results,” Rafid al-Jabouri, spokesman for Prime Minister Haider al-Abadi, told Al Jazeera on Thursday.

Mohammad Salem al-Ghabban, Iraq’s interior minister who is leading the investigation, said that it was too soon to brief parliament on the results of what had happened in the village of Barwana, north of Baquba, the capital of Diyala province.

Ghabban, who is a leader of the Badr Organisation, which maintains one of the leading paramilitary groups aligned with the government, said there would be a turnover at the Interior Ministry, to help restore the integrity and professionalism of Iraqi forces.

According to survivors interviewed by Al Jazeera, Shia armed men accompanied by Interior Ministry SWAT teams and Iraqi soldiers rounded up men in the Sunni village of Barwana.

After accusing them of belonging to ISIL, survivors said they were marched to a nearby field where the armed men took away men from the group, and shot them behind a wall.

The killings have raised fears that Iranian-backed Shia fighters central to the Iraqi government’s fight against ISIL, are not under the control of the government.

Some fear the repercussions of sectarian violence could launch a cycle of attacks dragging Iraq back into civil war.

Provincial politicians said more than 80 civilians were shot dead in Diyala, a mixed province with large numbers of Sunnis, Shia, Kurds and Turkmen.

“No one knows yet the exact number of dead but Human Rights Watch is investigating what appears to have been a massacre in Barwana,” Erin Evers, HRW spokesperson, said.

Evers said four witnesses interviewed so far reported seeing plain-clothes armed men and others in special forces uniforms open fire on more than 100 villagers, most of whom had been displaced from other villages.

Iraq’s own Human Rights Ministry said the area is still unsafe and it has no ability to independently investigate the killings.

They made us sit down and look at the ground - anyone who raised their head would be beaten with a rifle butt.

Survivor of the mass killing in Barwana

They said the security forces broke down doors and rounded up men in house-to-house searches.

“Some were wearing civilian clothing and others military uniform. Some were dressed like special forces and others in khaki trousers and black T-shirts,” said one of the survivors by telephone from Barwana.

The middle-aged man, who asked to be identified only as Abu Ahmed, said others were wearing bandanas and had wrapped green cloth around their wrists – traditional among Shia fighters.

“They said they came to check the registry books and ID cards to see if it matched their computer records because they were looking for some suspects,” he said.

After that, he and other men who survived, said they were tied together and forced to march while looking at the ground.

When they got to an abandoned house about a kilometre away, they found other groups of men, said another man who survived the killing.

“They made us sit down and look at the ground – anyone who raised their head would be beaten with a rifle butt,” said one of the men who asked not to be identified.

He said his cousin, who had raised his head when they heard gunshots, was first slapped in the face and then taken away and shot behind a crumbling wall.

Another survivor, who asked to be identified only as Abu Abdullah, said he saw the bodies of 13 of his neighbours, including school teachers and shop owners.

Several of the witnesses said at least six men had been executed behind the Barwana mosque and their bodies left on the ground.

“They fooled me – they told me this would be a check of the names of displaced families,” the distraught head of the village told Al Jazeera by phone.

The man, who asked to be identified only as Abu Azzad, said he had showed them the list after being told they were looking for specific suspects.

He said the surviving men in the village along with the women and children were running out of food and huddled in their homes, fearing the security forces would return.

Most of the men rounded up were displaced from Sinsil and other nearby villages in September, when Shia armed men started shelling ISIL positions near the towns.

Some of the survivors said the militia members were targeting the displaced men, saying they had been part of ISIL in the villages they had left.

Another survivor, Abu Karar, a student, told Al Jazeera he was let go because his identity card listed another town. The man standing next to him, from Sinsil, was taken away, and shot.

In a sign of how deeply personal the battle has become, he said those doing the killing appeared to be fighters from Diyala province, rather than further south.

The UN has called on the government to find and punish those responsible for the killings. 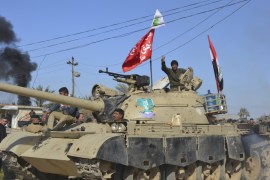 Iraq’s war within a war

An apparent massacre in Diyala serves as a reminder of something more dangerous to Iraq than the fight against ISIL.

Raqqa: ‘It is a very sad life under ISIL’

Residents fleeing Raqqa give testimonies of what life is like under ISIL. 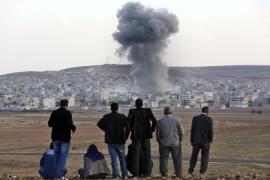 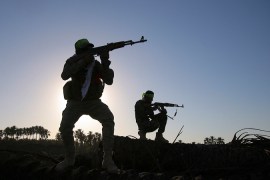