An Israeli rights group has criticised the government for what it called a deliberate policy of launching air strikes on homes that killed hundreds of civilians during last year’s Gaza war.

In a report examining 70 raids on residential buildings in the besieged Palestinian territory, B’Tselem said on Wednesday that Israeli officials were responsible for a large number of civilian casualties during the 50-day conflict that killed nearly 2,200 Palestinians.

“A hallmark of the fighting in Gaza this summer was the numerous [Israeli] strikes on residential buildings, destroying them while their occupants were still inside,” the 49-page report said.

“This aspect of the fighting was particularly appalling” and was “the result of a policy formulated by government officials and the senior military command.”

There is no question in our minds that this is not the outcome of a low-level decision, but rather a matter of policy, a policy that in some cases has violated international humanitarian law, in other cases raises severe questions.

In the cases B’Tselem investigated, 606 people were killed, 70 percent of whom were under 18 or over 60, while the United Nations says the conflict’s Palestinian death toll was almost 70 percent civilian.

The Israeli army rejected B’Tselem’s findings, in a statement released on Wednesday.

“The IDF does not attack residential buildings in Gaza, but rather military targets that are often located within residential buildings. The IDF categorically rejects the assertion of a policy of deliberately attacking residential homes solely on the basis that they were residences belonging to members of Hamas or Islamic Jihad,” the statement read.

The group questioned Israel’s claims that it went out of its way during the conflict to respect international humanitarian law.

“You cannot say that the army didn’t know or couldn’t know how many civilians would get killed during those attacks,” B’Tselem’s head of research Yael Stein said.

“You can’t maybe [know] on the first day or the second day. But on the 10th day or the 20th day, when you see how many civilians are getting killed … these attacks shouldn’t have happened,” she said.

B’Tselem demanded explanations for possible Israeli violations of international law, specifically in deciding whether a home constituted a legitimate military target, and whether its destruction gave a distinct military advantage outweighing collateral damage.

The report also criticised what it said were attempts to shirk responsibility for civilian deaths by blaming the government in Gaza headed by Hamas.

ICC lead prosecutor Fatou Bensouda has since announced her intention to launch an inquiry into possible war crimes committed during last summer’s war in Gaza.

Israel’s military attorney general is investigating individual incidents that took place throughout the Gaza war, but the policy of targeting residences specified by B’Tselem is not being probed.

In December, Amnesty International said the army carried out “deliberate destruction and targeting of civilian buildings and property on a large scale…without military necessity”.

B’Tselem’s report cites 13 incidents in which 179 people were killed, one of the worst having taken place on 29 July 2014, when 24 people, including 18 children, died during the bombing of a Khan Younis residential building.

The group, however, did concede that Hamas and other groups fired rockets at Israeli residential areas, thus breaching international law, but that, B’Tselem said, did not provide moral or legal justification for Israel’s indiscriminate policy which left many civilians dead.

During the war Israel heavily damaged or destroyed over 20,000 homes, as well as the territory’s power station and other major pieces of infrastructure, destruction that UN Secretary-General Ban Ki-moon described as “beyond description”.

On Tuesday, the UN agency UNRWA suspended its cash assistance programme in the Gaza Strip to tens of thousands of Palestinians due to the lack of donors fulfilling their pledges. In Cairo in October, $5.4bn was pledged but virtually none of it has reached Gaza, according to UNRWA director in Gaza, Robert Turner. 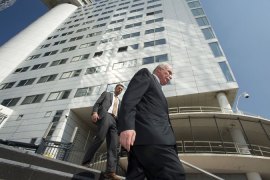 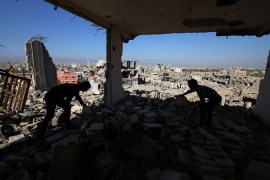 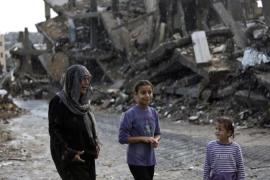