Saudi Arabia’s new king has inherited the throne amid colossal challenges, say Saudi analysts. These include managing the country’s relationship with the US, threats posed by the expanding Islamic State of Iraq and the Levant (ISIL), a power vacuum in Yemen and the decline in oil prices and its impact on the Saudi population.

On Tuesday, US President Barack Obama will cut short his three-day state visit to India to spend a few hours in Riyadh to pay his respects to the royal family.

Analysts say there is more to the visit than simply a courtesy call. “The management of relations with the US under the new strategy of the so-called ‘shift to Asia’ makes it more difficult of a challenge for King Salman [bin Abdulaziz al-Saud],” Mansour Almarzoqi, a researcher on Saudi politics at Sciences Po de Lyon, told Al Jazeera.

The visit comes at a crucial time, when the US Congress is currently debating a deal to increase sanctions on Iran – a bill Obama said he would veto should it reach his desk.

“Saudi Arabia has said it isn’t happy with the American approach and if the bill is ratified in Congress, it would be a gift from the skies for Saudi Arabia because they could at least delay the Iran-US deal for another couple of years while King Salman restrategises accordingly,” Almarzoqi said.

Meanwhile, hours before King Salman assumed the throne, Yemen was descending deeper into chaos, with the resignation of both the president and prime minister leaving the country at the edge of an abyss. This development, according to Almarzoqi, poses a greater challenge for Saudi foreign policy decisions.

“If a formal Houthi transition in power is confirmed by everyone involved, then we will see a very offensive and aggressive foreign policy in Saudi Arabia as it looks to counter Iranian influence.”

On another front, Saudi Arabia’s human rights record is one issue that rights groups want President Obama to raise with the new rulers of the kingdom. Recently, Saudi Arabia came under intense scrutiny from multiple rights groups over its decision to imprison two female Saudi drivers on anti-terrorism charges. The country also decided to publicly flog Raif Badawi, a liberal activist, after he was sentenced to 10 years in jail and 1,000 lashes for “criticising clerics and mocking the country’s morality police” on a blog that he founded. The first round of lashes was administered this month.

Hala al-Dosari, a Saudi rights activist and writer, told Al Jazeera that while the late King Abdullah had taken steps to aid women’s rights within the education field, meaningful reforms were missing elsewhere. She also added that rights groups do not expect much more from the new king but instead, predict further regression in the coming few years.

“We have seen only cosmetic changes during King Abdullah’s rule. King Salman has clearly expressed to the local media in the past that he is a conservative person when it comes to changing the status quo, and that he believes in a slow and gradual engagement with civil society,” Dosari told Al Jazeera.

We have seen only cosmetic changes during King Abdullah's rule. King Salman has clearly expressed to the local media in the past that he is a conservative person when it comes to changing the status quo, and that he believes in a slow and gradual engagement with civil society.

Human Rights Watch was quick to release a statement saying that while reforms were not fully realised during the former’s reign, King Salman now has the chance to react swiftly by taking steps to reform a “vague legislative” system that is “used to prosecute Saudis for peaceful speech, and [has to] create a written penal code that includes comprehensive human rights protections”.

“King Abdullah’s education plan was one where Saudi women applaud him greatly. I don’t want to say that there is no hope, but I do believe the change in the order and the recognition of the role of civil society might drive the new rulers in different directions,” said Dosari.

As OPEC’s biggest oil exporter and one of the world’s largest oil producers, the Gulf kingdom relies on its revenues to fund most of its expansive budget, which is designated to pay for perks such as subsidised fuel and large numbers of public-sector jobs for Saudi citizens.

However, oil prices have seen a drop since June and the current price of just below $50 a barrel is well short of the $89-per-barrel pricetag in 2013, according to the International Monetary Fund.

On December 25, 2014, the country’s cabinet, chaired by then Crown Prince Salman, approved the largest fiscal budget in recent years by increasing spending by more than five billion riyals ($1.3bn).

Analysts say that while the increased budget may pave the way for further development projects, “fast-changing global circumstances” might have to take precedence.

Hussein Shobokshi, a businessman and prominent columnist for Asharq Al-Awsat, recently said that while prioritised spending might not be a popular decision among ordinary citizens, an ever-increasing volatile region necessitates such a strategy.

“What was acceptable before cannot be acceptable now… The situation in the world and the region necessitates such prudence, so there will be a number of projects which must be postponed, since right now they are no longer a priority,” Shobokshi wrote.

During his inaugural speech, King Salman vowed he would not change any of his predecessor’s policies, pledging instead to “remain, with God’s strength, attached to the straight path that this state has walked since its establishment”.

“If there is one theme that King Salman has seemed to be stressing above all else in his first speech as king, it was continuity,” Fahad Nazer, a former political analyst at the Saudi Arabian embassy in the US, told Al Jazeera.

“In the short term, I don’t anticipate any major policy changes. But with oil prices having dropped by almost 60 percent since June and turmoil unfolding in Yemen to the south, and continuing violence and threats from the so-called Islamic State [ISIL] in the north, it would not be unreasonable for the new king and his advisers to reassess their policies regarding some of the crises across the region, especially Syria.” 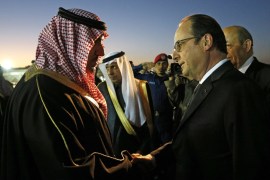 Leaders travel to Saudi Arabia to pay respects to king