An inquiry into the radiation poisoning of a former Russian spy has opened in London, with claims that there may have been an earlier assassination bid against Alexander Litvinenko.

Inquiry lawyer Robin Tam said on Tuesday that traces of radiation showed that before Litvinenko died in late 2006, a separate attempt was made against his life during a meeting at Mayfair hotel in the British capital in October of that year.

“One of the most significant things that the evidence suggests is that Litvinenko was poisoned with polonium not once but twice,” he told the inquiry at the Royal Courts of Justice, which was attended by Litvinenko’s widow Marina.

Tam showed diagrams of Mayfair hotel’s Erinys boardroom, where Litvinenko met two Russian individuals on October 16, 2006. He reported that the room showed heavy contamination on a section of the table and a chair, as well as on the spout of the teapot from which Litvinenko drank.

He said the heaviest contamination in the boardroom and the teapot was “off the scale” in excess of 10,000 counts per second (cps), way beyond the normal background radiation of around 0.5 cps.

According to reports, Litvinenko was allegedly poisoned by a cup of tea laced with polonium-210 during a separate occasion in London in 2006. Before he died three weeks later, Litvinenko publicly accused President Vladimir Putin of ordering his killing.

Russia has rejected the accusations, and refused to grant extradition for the two chief suspects named by British police – Andrei Lugovoi and Dmitri Kovtun – over the poisoning on November 1. Litvinenko died on November 23 2006.

While much of the attention has been on Lugovoi, a former KGB bodyguard who has since become a member of parliament in Russia, Tam’s comments focused more on the role of Kovtun.

Tam said that a friend of Kovtun from Germany – identified only as “D3” – is set to testify that the Russian told him he had poison and needed a contact for a cook to kill Litvinenko.

MI6, the mafia or an exiled oligarch

Kovtun also allegedly told his friend at a meeting on October 30 that Litvinenko was “a traitor with blood on his hands,” he added.

Tam said “there are a number of strands of evidence relating to possible Russian state responsibility for Litvinenko’s death.”

But he indicated that he would also look at other theories, including the possibility that he may have been killed by Britain’s MI6 foreign intelligence service, the Russian mafia or exiled oligarch Boris Berezovsky.

Speaking to Russia’s TASS news agency, Lugovoi on Tuesday dismissed the inquiry as “a farce”.

The inquiry’s chairman, judge Robert Owen, said on Tuesday that the public hearings would last for two months and that he expected his report to be ready by the end of the year.

Under English law, such inquiries are not trials and only establish the facts of a case in public but do not result in convictions.

Ben Emmerson, lawyer of Litvinenko’s wife Marina, said on Tuesday that Litvinenko had been investigating alleged ties between Putin and organised crime. 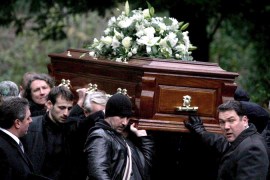