A new round of peace talks between Libya’s warring factions has kicked off in Geneva with all parties showing a “constructive spirit”, the United Nations has said.

“I am confident that Libyans participating and those who hopefully will join the talks have a very clear determination to reach an agreement, to pacify the country and to overcome the crisis,” Bernadino Leon, the UN envoy for Libya and mediator in the talks, said on Monday.

“There is a very constructive spirit. There are very good ideas on the table,” he said in a statement after Monday’s talks, adding “everything is positive.”

During a first-round of UN-mediated discussions in the Swiss city earlier this month, the warring factions from the country agreed on a roadmap to form a unity government.

Leon warned ahead of the first round of talks that they were a last-ditch effort to prevent all-out chaos, and that the country was rapidly becoming a hotbed of armed group.

He said Monday that he was satisfied with the progress so far.

“It’s an excellent atmosphere. What is important is to build trust,” he said, adding: “All these steps we are taking are sound steps.”
The north African nation has been wracked by conflict since the overthrow of dictator Muammar Qaddafi in a 2011 uprising, with rival governments and powerful militias battling for control of key cities and the country’s oil riches.

The second round of talks, which will continue on Tuesday, counted participants from a range of groups and representatives of civil society.

But the Fajr Libya (Libya Dawn) militia alliance, which took over Tripoli last summer, was not officially taking part.

However, it did declare a ceasefire with Libya’s army following the January 15 agreement, and some of the group’s high-level officials from cities beyond the capital, including Misrata, were in Geneva for the negotiations.

Ahead of the talks, the UN’s Libya mission UNSMIL appealed to all sides “to approach these talks… in a spirit of openness and reconciliation that is guided by the higher national interest of the Libyan people”.

In addition to the main political track resuming Monday, the UN said another meeting would be taking place in Geneva on Wednesday bringing together municipal and local council representatives from cities and towns across Libya to discuss “confidence building measures and ways to implement them.”

UNSMIL said it also planned to convene a number of other meetings later.

“These will include representatives from Libyan political parties, social and tribal forces, as well as the armed groups,” it said in a statement.

The internationally-recognised government and elected parliament decamped last summer to the country’s far east after Fajr Libya seized Tripoli and set up its own administration.

The first round of talks appear to have done little to calm the situation on the ground.

Libyan Deputy Foreign Minister Hassan al-Saghir was kidnapped Sunday by gunmen posing as security forces in the eastern city of Al-Baida, where the recognised government is based.

He was released Monday and was in good condition, a ministry official said, without providing further details. 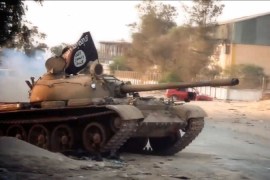 US and European allies call for calm in Libya

France, Italy, Germany, and Britain join US in condemnation of fighting that has killed dozens in port city of Benghazi.