Ahmed Awad bin Mubarak was relased on Tuesday, and handed over to local tribes in the southern province of Shabwa, a representative of the group told the Associated Press news agency.

Al Jazeera’s Hashem Ahelbara said freeing Mubarak could be seen as “a first step towards reconciliation” in the country.

“This could be part of a confidence-building step.”

Hadi announced last week that he would leave office under Houthi pressure. But his resignation has not been finalised.

Ahelbara said that despite Mubarak’s release, the country remains in a political deadlock.

“It’s a very delicate situation now, not only for Yemenis but for neighbouring countries like Saudi Arabia,” he said. “If this continues, you might see Yemen disintegrating.” 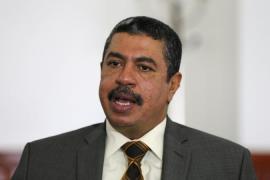 President appoints UN envoy Khaled Bahah as PM, in a move welcomed by Houthi rebels who control the capital.