In a statement issued on Monday, Stoltenberg also accused Moscow of boosting support for pro-Russian rebels who have seized large parts of eastern Ukraine. The claim has been repeatedly denied by Russia.

“We have seen a substantial increase in the flow of equipment from Russia to the separatists in Ukraine,” he said

Putin called the Ukrainian military a “NATO foreign legion,” reflecting his readiness to stand up to the West regardless of rising economic costs, as Standard & Poor’s rating agency downgraded Russia’s credit rating to junk.

While the Russian ruble tumbled further on the news of the downgrade, Putin’s spokesman shrugged off the Western threat of more sanctions as “short-sighted.”

Speaking to students in St Petersburg, Putin said the Ukrainian leadership was to blame for the upsurge in violence and accused it of using civilians as “cannon fodder” in the conflict.

“(Ukraine’s army) is not even an army, it’s a foreign legion, in this case a NATO foreign legion,” Putin said, adding that it’s serving the goal of “the geopolitical containment of Russia, which absolutely don’t coincide with the national interests of the Ukrainian people”.

From the onset of the conflict, which has claimed more than 5,100 since April, Russia urged the Ukrainian authorities to offer broad powers to the separatist eastern provinces and provide amnesty to the rebels.

A cease-fire deal signed in September by representatives of the government and the insurgents included some of those provisions along with a pledge to withdraw foreign fighters and place European monitors on the Russian-Ukrainian border, but it has been violated by both parties and fighting has continued.

The Kremlin’s uncompromising stance is rooted in its desire to prevent Ukraine from ever joining NATO by securing a broad autonomy for the separatist provinces in the east. To avoid being called a party to the conflict, as Ukraine and the West see it, Russia is pushing the Ukrainian government to speak directly to the rebels.

The latest rebel offensive, which involved the deadly shelling of a strategic port city of Mariupol over the weekend, appeared aimedat pressuring Kiev into such talks. 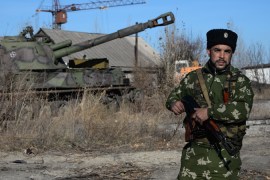 US envoy to the UN says Moscow is the “root of the problem” after NATO confirms entry of Russian weapons into Ukraine. 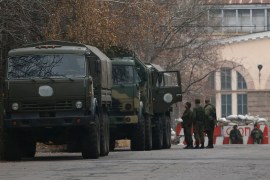