US President Barack Obama and Indian Prime Minister Narendra Modi have announced that they have reached a “breakthrough understanding” in efforts to allow US investment in nuclear energy development in India.

Obama arrived in New Delhi on Sunday for an unprecedented second visit to India by a serving US president aimed at consolidating what he has called one of the “defining partnerships of the 21st century”.

He said at a news conference in the capital with Modi that the two countries had made progress on two issues holding up commercial civil nuclear cooperation, one of the major irritants in bilateral ties.

“We are committed to moving towards full implementation,” Obama said. “This is an important step that shows how we can work together to elevate our relationship.”

The agreement resolved differences over the liability of suppliers to India in the event of a nuclear accident and US demands on tracking the whereabouts of material supplied to the country, US ambassador to India Richard Verma told reporters, the Reuters news agency reported.

“Ultimately it is up to the companies to go forward, but the two governments came to an understanding,” he added.

“I am pleased that six years after we signed our bilateral agreement, we are moving towards commercial cooperation, consistent with our laws [and] international legal obligations,” Modi said at the news conference.

The two countries had signed a deal in 2008 giving India access to civilian nuclear technology, but it has been held up by US concerns over India’s strict laws on liability in the event of a nuclear accident.

Modi said a climate deal between the US and China did not put pressure on India, but that global warming itself was reason enough to take action.

India, the world’s third largest carbon emitter, is reluctant to follow the other two in committing to a peak year for emissions on the grounds it needs economic growth.

Obama will be the first US president to attend India’s Republic Day parade on Monday, an annual show of military might long associated with the anti-Americanism of the Cold War. He will also host a radio show with Modi.

The president’s presence at the parade at Modi’s personal invitation is the latest revival in a roller-coaster relationship between the world’s two largest democracies that just a year ago was in tatters.

The US views India as a vast market and potential counterweight to China’s assertiveness in Asia, but frequently grows frustrated with the slow pace of economic reforms and unwillingness to side with Washington in international affairs.

Meanwhile, India would like to see a new US approach to Pakistan.

“Particularly with regards to security, and we would like a much greater understanding with the United States with regards to regional issues,” India’s Finance Minister Arun Jaitley said in Davos ahead of Obama’s visit.

Elected last May, Modi has injected a new vitality into the economy and foreign relations and, to Washington’s delight, started pushing back against China’s growing presence in South Asia.

Annual bilateral trade of $100bn is seen as vastly below potential and Washington wants it to grow five-fold. 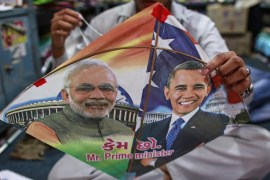 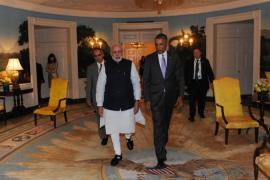 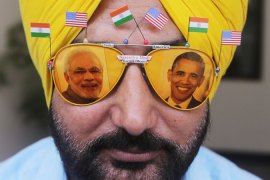