An Egyptian appeals court has ordered a retrial of 152 members of the outlawed Muslim Brotherhood movement, including 37 sentenced to death in a mass trial that had sparked international condemnation, judicial officials have said.

Saturday’s ruling came less than a year after a lower court in the southern province of Minya sentenced 529 members of the Brotherhood – the movement of ousted President Mohamed Morsi – to death last March accused of attacking a police station and killing an officer in August 2013.

The accused included 152 whose cases were sent for retrial.

The lower court later commuted the death sentences to life in prison in the case of 492 defendants, while 37 were to be executed.

The 152 defendants in custody appealed the lower court’s verdict, which the Court of Cassation overturned, ordering a retrial.

Another batch of 183 members of the Brotherhood, including Mohamed Badie – the ehad of the movement – were also sentenced to death by the same Minya court last June on similar charges.

Badie, who is in custody and facing several trials, was granted a retrial along with 27 others for being sentenced in absentia by the court in Minya.

Under Egyptian law, people sentenced in absentia automatically get a retrial if they surrender themselves.

Since the army ousted Morsi in 2013, the authorities have launched a crackdown on Badie’s supporters, leaving hundreds dead and thousands jailed after speedy mass trials.

The UN has denounced such mass trials, calling them “unprecedented in recent history”.

Morsi and several top leaders of the Muslim Brotherhood are facing several trials on charges punishable by death. 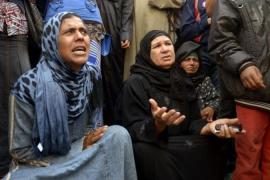 Egypt comes full circle: The end of the Arab Spring

The death sentences for 529 defendants in Minya are a step back for democracy in Egypt.