Heavy clashes between Yemeni security forces and Houthi rebels have spread across downtown Sanaa, with the country’s information minister telling Al Jazeera there could be a “new Yemen” by the end of the day.

Clashes began early on Monday near the presidential palace and quickly spread to other strategic areas in the city.

Witnesses said heavy machine gun fire could be heard as mortars fell around the presidential palace.

Civilians in the area fled as columns of black smoke rose over the palace. Medics said at least two people had been killed and 14 others wounded as ambulance sirens wailed throughout Sanaa.

Hakim al-Masmari, editor-in-chief of the Yemen Post, described the fighting as much more dramatic than when the Houthis took control of the capital in September.

“This chaos is the first of its kind,” al-Masmari told Al Jazeera.

Information Minister Nadia Sakkaf said the convoy of Prime Minister Khalid Bahah was attacked after he left a meeting with high-level Houthi representatives.

She said a Houthi convoy had also been attacked – suggesting that a “third party” was involved. She did not specify who had attacked the convoys.

Sakkaf said no single party was in control of the city. She said some of the army was responding to President Abd-Rabbu Mansour Hadi but that there were “some in uniform that don’t obey their superior”.

“I’m very worried that al-Qaeda or other terror organisations will use the lack of order and target anybody,” she said.

“This story is developing so quickly… We may have a new Yemen by the end of the day, maybe a new system altogether.”

She denied reports that the president had left Sanaa, saying he was still in his residence.

Earlier on Monday, Sakkaf had told state television that a ceasefire deal had been reached with the rebels. There was a brief lull in fighting, but gun battles resumed after just an hour.

In the inital stages of fighting, a military source in the presidential guard accused the Houthis of deploying fighters and setting up a checkpoint near the palace. He said the Houthis refused to withdraw and opened fire on the soldiers, after which the army responded.

However, a Houthi official told Al Jazeera that the presidential security forces attacked the Houthi checkpoint, leading to the clashes around the palace area.

Sanaa has been tense for the past two days following the Shia rebels’ abduction of the president’s chief of staff.

A deal signed in September between political parties and the Houthis called for the formation of a new unity government followed by the withdrawal of Houthi fighters from the capital. The fighters have remained in place.

The Houthis, who have launched attacks on al-Qaeda’s Yemen branch, are viewed as Shia Iran’s ally in its regional struggle for influence with Saudi Arabia. 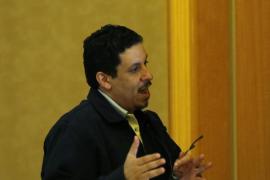 Head of national security service says talks have begun to secure release of chief of staff seized by Shia rebels.