Riots blamed on the publication of a cartoon in the French satirical weekly Charlie Hebdo depicting Prophet Muhammad have left at least 10 people dead in Niger, according to the the country’s president.

Mahamadou Issoufou said on Sunday that five deaths were reported after demonstrations in the capital Niamey the previous day.

Those killed on Saturday were inside churches and bars that were set ablaze, Issoufou said.

Five other people were killed on Friday.

In another development on Saturday, police also fired tear gas to disperse hundreds of opposition supporters who gathered in Niamey in defiance of a ban on a demonstration against what they see as poor governance, witnesses said.

The march was not connected to the riots and had been banned by Niamey’s governor after rioters protesting against the Charlie Hebdo cover illustration attacked churches, bars and a police station.

The decree stopping the demonstration did not give a reason for the decision, Reuters news agency reported.

A government official speaking on condition of anonymity because he was not authorised to speak to the media said the authorities had feared the march could be infiltrated by anti-Charlie Hebdo rioters.

Political tensions have risen in Niger since 2013 when Hama Amadou, a powerful former political ally of the president, split from the ruling coalition.

Hama, speaker of parliament at the time, fled Niger last year after leading legislators authorised his arrest on suspicion he was involved in a baby-trafficking ring. He has denied the accusations.

The victims of Friday’s cartoon-related violence were attacked in the town of Zinder after prayer services, officials said.

The issue, published on Wednesday, was the first following a January 7 attack on the magazine’s headquarters in Paris that left 12 dead.

Physical depictions of the prophet are considered blasphemous, and protests have erupted in a number of predominantly Muslim countries this week. 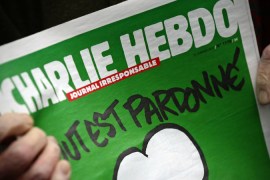 The return of Charlie Hebdo

The controversial magazine continues to make headlines; plus, the screwball comedy that turned into political standoff.