Ukrainian officials say at least 11 civilians have been killed and a further 13 wounded in rebel shelling of a military checkpoint in the country’s east.

The Donetsk regional administration, answering to the central government in Kiev, said in a statement that the rebels shelled the checkpoint on Tuesday near the town of Volnovakha in the Donetsk region while a passenger bus was passing through it.

The claim about the source of the fatal shelling could not be independently verified.

Al Jazeera’s Paul Brennan, reporting from Kiev, said though police in the area where the attack happened said 11 people were killed and some 13 injured.

“There is has been a spike in the unrest … over the past couple of days but what we’re hearing from Donetsk … is certainly an escalation and a tragic one at that,” said our correspondent.

“A civilian bus travelling between Donetsk and Mariupol has been hit apparently by a stray munition.

“I am not quite sure whether it is a shell or a rocket launched by a grad rocket launcher, but it has certainly taken a direct hit.

“Photographs of the bus show the windows have been smashed in [and] there are large pools of blood by the entrance-exit door.”

Donetsk regional interior ministry department chief Vyacheslav Abroskin said the rocket appeared to have gone astray after being fired at a road block set up near the town of Volnovakha.

“It was a direct hit on an intercity bus,” Abroskin said.

“An investigation is in progress. The road between Donetsk and Mariupol has been closed,” he said in reference to a strategic port city controlled by Ukrainian forces.

There was no immediate comment about the incident from any of the main separatist leaders.

The rebels and the Kiev government frequently blame each other for stray rocket and artillery fire that kills and wounds civilians in the eastern industrial war zone on an almost daily basis.

Ukraine earlier reported the death of three civilians and a soldier in the past day of fighting.

Fighting between the Ukrainian government troops and pro-Russian rebels has killed more than 4,700 people since April.

Hostilities have intensified in recent days, jeopardising hopes for a peace deal.

The news of the shelling came amid reports that the US plans to provide up to $2bn in loan guarantees to Ukraine this year, as part of a broader international package to stave off bankruptcy in the country.

The US Treasury said the guarantees would be contingent on Ukraine remaining on track with the conditions of its loan programme from the International Monetary Fund.

IMF officials are in Kiev this week to resume negotiations on the package.

Nathan Sheets, US treasury undersecretary, was due to meet Ukrainian officials in Kiev on Tuesday, including Arseny Yatseniuk, the prime minister, and Valeria Hontareva, the central bank governor. 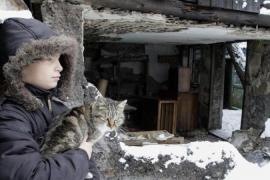 In eastern Ukraine, a struggle to survive winter

With no cash available and food supplies dwindling, humanitarian crisis brews in the cold in rebel-held east. 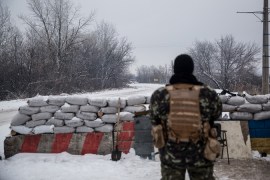 Ukraine: All quiet on the eastern front

Government soldiers on the front lines speak to Al Jazeera about war, peace and the precarious ceasefire.