An estimated 3.7 million people joined by dozens of world leaders have marched across France in honour of the 17 people killed in attacks in Paris, according to the country’s interior ministry.

In Paris, up to 1.6 million took part in Sunday’s rally, among them family members of the 12 people killed during the massacre at the Charlie Hebdo weekly, a satirical publication that often published cartoons lampooning revered religious figures.

The demonstration was described as the largest in France’s modern history – larger than marches staged when the allied forces liberated the city from the Nazis in World War II, the interior ministry said.

Each of the families of the Charlie Hebdo staff wore a white bandana on their head with the word “Charlie” written across.

About 2,200 security personnel guarded the route of the march, which ran 3km from the historic Place de la Republique to Place de la Nation in the east of Paris, France’s interior minister said, with snipers stationed on rooftops.

Netanyahu addressed the crowd and singled out al-Qaeda, Hamas, al-Shabab, Boko Haram and Syria’s al-Nusra Front, saying they had a “common denominator”.

Earlier Al Jazeera’s Jacky Rowland, reporting from Paris, said French Muslims were having difficulty taking part in a march “where Israeli leaders are participants because they view them as war criminals”, an apparent reference to last summer’s offensive between the Palestinian group Hamas and Israel, which killed more than 2,100 Palestinians and 72 Israelis.

The violence in Paris began with an attack on Wednesday on the office of Charlie Hebdo, which has published cartoons of Prophet Muhammad and other religious figures.

In that attack, Cherif and Said Kouachi killed 12 people including some of France’s best-known cartoonists.

Five other people died as assailants took people hostage and police battled the attackers to free the hostages.

Cherif told a French media outlet over the phone that he had been sent to carry out the attack by al-Qaeda’s Yemeni branch, which has previously launched several attempts to attack western targets.

A senior member of al-Qaeda in the Arabian Peninsula (AQAP) claimed Wednesday’s attack, saying it was an operation to avenge the honour of Prophet Muhammad.

Security officials have not confirmed the claim but at least one of the Kouachi brothers was known to have been trained by AQAP in Yemen.

European ministers, as well as Eric Holder, the US attorney general, met in Paris to discuss security threats ahead of the march. 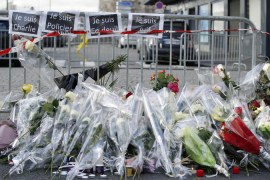