The SpaceX company has successfully launched a fresh load of supplies to the International Space Station, but has failed the first-ever attempt to recycle a rocket by relanding the ship on an ocean platform.

The rocket was launched early on Saturday from Cape Canaveral, Florida, and was to be followed minutes later by an attempt to guide its first stage down to the platform in the Atlantic Ocean, 322km north of the launch site.

SpaceX later said the mission failed after the equipment collided with an ocean platform and broke into pieces.

The Dragon cargo capsule itself was successfully launched into space and is expected to dock with the space station on Monday.

The rocket was carrying supplies for the International Space Station, with a primary mission to deliver more than 2,300kg of food, supplies and equipment ordered up by NASA.

SpaceX, a California-based company, said the test was a step forward towards one day transforming the aerospace industry and making rockets reusable.

SpaceX had given the test landing a 50-50 chance of success prior to the launch.

It has had some success with two previous attempts to make a controlled landing in the ocean, slowing the rockets to a hover before they splashed down. 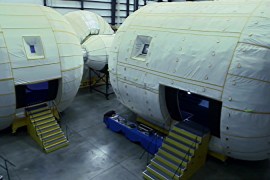 What happens when corporations go in search of profits in the unregulated territory that is space? 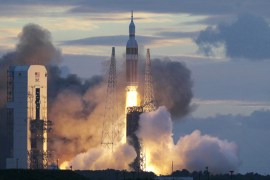 Is NASA’s Orion spacecraft the start of a new era of space exploration or the last gasp of a fading empire? 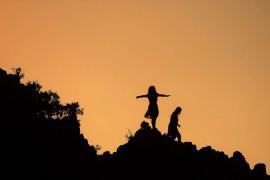 The sounds of space exploration