The bodies of two victims of the AirAsia plane crash have been returned to Indonesia’s Surabya airport from where the ill-fated jet took off three days ago before plunging into the Java Sea.

The two coffins were taken from an air force plane on Wednesday to a military ambulance to be transported to a hospital for examination and identification.

Relatives of passengers and crew also gave their DNA to help identify bodies as they were recovered.

The bodies of at least five other people have so far been recovered and are being taken back to the airport.

Many families have been left waiting for news as bad weather hampered search efforts.

Officials had hoped to recover most of the bodies, but rough conditions made it difficult for helicopters to fly over the area in the Java Sea where several corpses and debris from the ill-fated Airbus A320-200 were found a day earlier.

Stormy weather had temporarily forced Indonesian search teams to suspend the recovery of the bodies of 162 people aboard the ill-fated AirAsia plane which crashed into the Java Sea. Search efforts resumed later on Wednesday evening

US-based The Wall Street Journal newspaper reported that Indonesia’s search-and-rescue agency obtained a sonar image it says may be the body of the missing plane at the bottom of the Java Sea.

The newspaper quoted the agency as saying that the image appeared to show an aircraft upside down in 24-30 metres of water.

Indonesian President Joko Widodo said his priority was getting bodies off the bottom of the Karimata Strait in the Java Sea, where rescuers retrieved a plane door and other debris on Tuesday, so victims could be identified.

“I feel a deep loss over this disaster and pray for the families to be given fortitude and strength,” Widodo said in Surabaya on Tuesday after grim images of the scene in the Java Sea were broadcast on television.

Widodo said AirAsia would pay an immediate advance of money to relatives, many of whom collapsed in grief when they saw the television pictures of debris and a body.

AirAsia Chief Executive Tony Fernandes has described the crash as his “worst nightmare”.

At least 30 ships and 21 aircraft from Indonesia, Australia, Malaysia, Singapore, South Korea and the United States have been involved in the search.

Flight QZ8501 went missing after air traffic controllers lost contact with the aircraft while travelling to Singapore from Surabaya in East Java on Sunday.

Shortly before disappearing, AirAsia said the pilot of the plane had asked permission from air traffic control to change course and climb above bad weather in an area noted for severe thunderstorms.

The airline said most of the passengers on board Flight QZ8501 were Indonesians, with three South Koreans and one person each from Singapore, Malaysia, Britain and France. 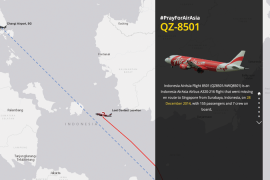 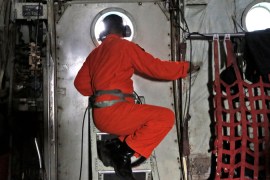 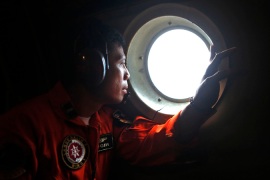