An Indian court has sentenced five men to death and jailed seven others for life for planning bomb blasts that struck Mumbai commuter trains in 2006, killing more than 180 people and wounding hundreds.

KP Raghuvanshi, a former Maharashtra Anti-Terror Squad (ATS) chief, who had previously handled the case, welcomed Wednesday’s sentencing, saying the court had recognised their investigation into the blasts.

“The whole case went on for nine years,” he said.

“After a long trial of nine years, the court has announced the judgement of the case. Five bomb planters have been sentenced to death by hanging and others have been convicted under different sections of the law for conspiracy, IPC [Indian Penal Code] Explosives Act, MCOCA [Maharashtra Control of Organised Crime Act]. The court has recognised our entire team’s investigation.”

However, Gulzar Azmi, a representative of an organisation providing legal support to the convicts, said the trial was unfair and they would appeal in a higher court for justice.

“The real criminals behind the blasts have not been caught. They have given sentence to innocent people,” he said.

“It is the court’s decision [to pass this judgement] but the High Court has shot down other such judgements by lower courts before.”

For his part, Yug Mohit Chaudhry, the defence counsel, said: “The evidence in this case is shoddy to say the least. It is not fit for conviction, let alone a death sentence.”

Indian police say the attack was carried out by disaffected Muslims at the behest of Pakistan-based armed groups, and named Lashkar-e-Taiba group’s Pakistan-based leader, Azeem Cheema, as the prime conspirator.

Seven bombs went off within 15 minutes on the packed trains during the evening rush hour in India’s financial capital on July 11, 2006, throwing the city out of gear and into an absolute state of terror.

The bombs targeted an overcrowded suburban network that carries around seven million people a day. 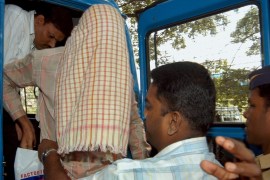 A special court convicts 12 out of 13 men accused of planning bombings on commuter trains that killed 187 people.