Diplomats say the US will refuse to negotiate over a draft statement that Russia had hoped the UN Security Council would approve to bolster its position on Syria ahead of a major gathering of world leaders.

A draft of Russia’s council statement, obtained by the AP news agency, urges countries to fight extremist groups “in coordination with the governments of the affected states”.

The language can be seen as a reference to Syria’s government, which Russia supports.

Russian military shipments to Syria have alarmed the US and its allies in recent weeks, and President Vladimir Putin is expected to defend them in a UN speech on Monday.

US President Barack Obama and his Russian counterpart Vladimir Putin are set to meet at the sidelines of Monday’s UN meeting to discuss the situations in Syria and Ukraine.

Sheba Crocker, the assistant US secretary of state for international organisation affairs, confirmed that the US told Russia it couldn’t support its proposed statement on Syria.

“We have concerns that a council presidential statement could be perceived as endorsing an approach that could set back efforts to reach a negotiated political transition in Syria,” Crocker told reporters in Washington.

Crocker said the draft was at “significant variance with the ongoing efforts of a coalition of more than 60 countries, including all of Syria’s neighbours to counter ISIL”.

Opinion: Putin is back – but where’s Obama?

A senior US official said the meeting with Obama had been arranged “in the context of the UN General Assembly” at the request of Putin.

“It would be irresponsible not to test whether we can make progress through high-level engagement,” the official told AFP.

Washington and its EU allies have urged Moscow to explain its military buildup in Syria, which has been reported to include airport facilities and bases, as well as planes and tank-landing ships.

The US and Moscow have also been locked in a bitter feud over the crisis in Ukraine that has pushed relations to their lowest point since the Cold War.

Putin and Obama last held a fleeting meeting on the sidelines of an APEC Asia-Pacific summit in Beijing in November 2014.

Their last official bilateral meeting was in June 2013 at the G8 summit in Northern Ireland.

Moscow on Thursday announced naval exercises in the east Mediterranean, which are set to run into next month. 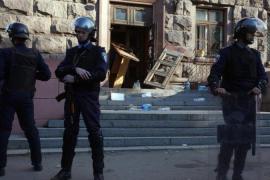 Is Putin going all the way in Ukraine?

Ukraine stands on the precipice of war as pressure mounts on Putin, seen as ‘saviour’ of the Eastern Slavic world. 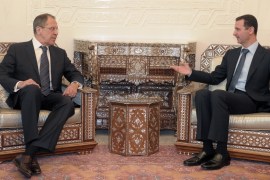