Syrian President Bashar al-Assad has attended holiday prayers at a Damascus mosque in a rare public appearance, as an air strike on an internet cafe in Idlib province killed several children, activists have said.

Assad on Thursday led the Eid al-Adha prayers at the Al-Adel mosque with state and ruling Baath party officials, as well as a number of Muslim religious leaders and civilians, according to a video released by Syria’s state agency.

“Syria hasn’t known the joy of Eid for more than four years, but when we say ‘Blessed Eid,’ it’s because we believe that this blessing… is the only thing that will bring back safety and stability to Syria,” he said.

In his speech, Assad commended regime soldiers “who are on the front lines fighting terrorism,” as well as Syria’s public employees and students.

On Wednesday, Assad issued two decrees increasing monthly wages for public sector employees in Syria, in an apparent gesture on the eve of the Muslim holiday.

Since the uprising against his rule erupted in March 2011, Assad’s few public appearances have been mostly limited to official prayers on feast days.

“Syria knows the real Islam, atop the minarets and in the mosques,” Minister of Religious Endowment Ahmed Samer Qabbani said in a sermon at the Al-Adel mosque quoted by SANA.

“We ask God to defend our country against evil and harm, and to grant success to President Bashar al-Assad,” Qabbani said.

Damascus has been largely spared the devastation wrought on other Syrian cities by the civil war, although there has been periodic mortar and rocket fire by rebels entrenched in the suburbs.

Despite the Eid Al-Adha holiday, fighting continued in other parts of Syria.

Several children were reportedly killed in an air strike on Thursday by forces loyal to Assad in the Kafruma village in the Idlib province, the Reuters news agency reported.

Activists said an internet cafe was was hit during the strike.

Meanwhile, an activist in the ancient city of Palmyra told Al Jazeera that days-long government air strikes targeting the area controlled by the Islamic State of Iraq and the Levant (ISIL) group have forced all but a few dozen residents to flee.

A Palmyra resident told the AP news agency that the bombardment, which included dropping barrel bombs, continued on Thursday without any respite as Muslims started marking the first day of Eid Al-Adha.

At least 250,000 people have been killed in the Syrian conflict, according to the United Nations, and more than half of Syria’s prewar population of 22.4 million has been internally displaced or fled abroad. 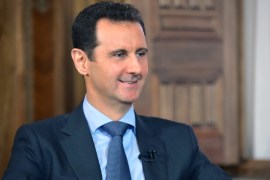 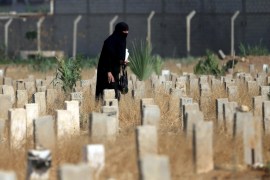