Malaysian police have arrested eight people, including four believed to be ethnic Uighurs, for questioning in connection with last month’s bombing of a shrine in Bangkok that killed 20 people, a senior official has said.

National deputy police chief Noor Rashid Ibrahim said on Wednesday that they were detained in the past week in Kuala Lumpur as well as in northeastern Kelantan state.

While there is no evidence they were directly involved in the bombing they are being investigated to see if they had any role in other activities surrounding the blast.

Uighurs are an ethnic minority in China and many complain of oppression by the government. Some Uighurs have been involved in a separatist movement in the Chinese region of Xinjiang where most of them live.

Thailand has suggested that those behind August’s blast at the Erawan Shrine, popular among Chinese tourists, may have been from a gang involved in smuggling Uighurs from Xinjiang. Others speculate they may be separatists angry that Thailand repatriated more than 100 Uighurs to China in July.

Noor Rashid said four of the eight arrested were Malaysians involved in human trafficking, while another four were believed to be Uighur men who entered the country illegally, he said, according to the Associated Press news agency.

“Right now, there is no concrete evidence to show that they are directly involved,” Noor Rashid told reporters. He said Thailand will need to provide basic proof of their involvement in the bombing if it wants to extradite the suspects.

Noor Rashid initially said the Uighurs had no documents on them and that their only offence was entering Malaysia illegally from Thailand. However, he later said they had passports but it was unclear if they were genuine. He didn’t give further details.

Thai authorities have arrested two suspects they say were linked to the bombing, but believe the actual bomber and the mastermind of the plot have fled the country.

In Bangkok, Thailand’s national police spokesman, Prawut Thavornsiri, said the person who placed the bomb at the shrine is not among those arrested in Malaysia. “This is not our wanted person,” he said.

Prawut also said that an arrest warrant has been issued for the 14th person alleged to be involved in the bombing. He said the suspect purchased a substance from a chemical shop and brought it to an apartment where police subsequently found bomb-making material and fake passports.

The blast at the shrine in the Thai capital’s centre also injured more than 120 people. Many of the victims were foreigners as the shrine is a popular destination for tourists and Thais alike.

Buddhist monks lead prayers at popular tourist site in Thai capital where a bomb killed at least 20 people on Monday. 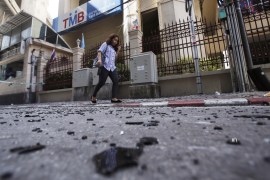