At least 38 fighters from the Islamic State of Iraq and Levant (ISIL) group have been killed over the last 24 hours as Syrian government warplanes bombarded the group’s strongholds in central Syria, a monitoring group said.

The Syrian air force has been increasing its strikes against ISIL in recent days as it received reinforcements from Russia, he said.

“The number of raids is growing and the strikes are more precise after the Syrian air force received arms and more efficient planes from Moscow,” said Abdelrahman, whose UK-based group relies on broad network of civilian, military and medical sources inside Syria.

Musk said the previously undisclosed work was taking place at a weapons storage facility and military base north of Latakia, suggesting Russia is preparing to deploy troops to both locations.

Russia has been dramatically increasing its forces at an air base south of Latakia, a stronghold of Syrian President Bashar al-Assad, including positioning combat planes and helicopters as well as tanks and accommodation blocks.

In a separate development, a coalition of rebel groups claimed it has freed a British woman and her five children who were kidnapped in the country as they fled an area controlled by ISIL in northern Syria.

The statement by Jabha al-Shamiya, or the Levant Front, was posted on the group’s Facebook page on Monday and reported on Tuesday by the US-based SITE Intelligence Group, which monitors armed groups’ websites.

The British Foreign Office said a British woman and her five children have been reported missing in Turkey, but a spokeswoman would not confirm it is the same case.

“We continue to work closely with the Turkish authorities on the whereabouts of a British national and her children, originally reported missing in Turkey, and stand by to provide consular assistance,” the spokeswoman said on condition of anonymity in line with regulations.

The Levant Front, which mostly operates in the northern Aleppo province, said the woman had travelled to an area controlled by ISIL to convince her husband to leave, but failed.

The group said the woman was kidnapped as she fled from the ISIL-held area; it did not identify her kidnappers. It said the kidnappers tried to “extort” the woman, but would not elaborate.

Levant Front also said it handed the woman over to her “people” on Monday night, reporting that the woman was in good health. 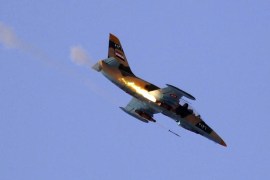 Jets carry out at least 11 attacks in assault on ISIL-held city by forces loyal to President Assad. 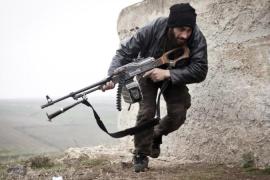 General admits only “four or five” US-trained fighters remain on battlefield after Division 30 was sent into Aleppo.