The attack on the air force base in Pakistan’s northwest is known to be the first deadliest attack since 2014 by the Pakistani Taliban. The group has proven to be resistant over the years, indicating a substantial threat to Pakistani security.

The Pakistani Taliban, formally known as the Tehreek-e-Taliban, is a rebel group in Pakistan allied with al-Qaeda and the Afghan Taliban. Uniting a number of rebel groups into a single one, the hardline commander Baitullah Mehsud, formed the group in 2007.

The group has a close relationship with the Haqqani Network, an armed group which fights against the US-led NATO forces in Afghanistan. The Pakistani Taliban has particularly been active in the North and South Waziristan, the country’s northwest region bordering Afghanistan.

The armed group’s objective is to enforce its strict version of Islamic law, introducing and supporting punishments such as public executions, stoning and amputations. The only time they could enforce Islamic law was in Pakistan’s Swat Valley for a short period of time.

RELATED: Is Pakistan backing the Taliban?

“They believe that their hardline Islam is the real one and that in the name of religion they can get power and influence in their areas,” Haroon Rashid, a Pakistani Taliban expert and journalist based in Pakistan, told Al Jazeera.

“They [Pakistani Taliban] think the Pakistani army is following US dictates as its stooge and hence liable to be attacked.”

The Pakistani Taliban were initially funded by the US and Pakistan to fight against the Soviets in the first Afghan war in the 1980s, however, after the US invasion of Afghanistan in 2001, the group turned against the Pakistani state for supporting the invasion. The group was designated as a terrorist organisation by the US in September 2010.

Since then, the Pakistani army has made numerous efforts to eradicate the group. In June 2014, the offensive, Zarb-e-Azb (the strike of the prophet’s sword) was launched in North Waziristan against the group.

The government has claimed that attacks have fallen by 70 percent since then. However, the Pakistani Taliban has still been successful in carrying out the most deadly attacks in Pakistan – the Pakistan air force base attack, the Peshawar school massacre and the attempt to kill teen activist, Malala Yousafzai.

“The Pakistani military has been hitting [the Pakistani Taliban] hard since the December 2014 Peshawar school massacre, claiming they’ve killed as many as 3,000 militants from several groups, including [the Pakistani Taliban], during the Zarb-e-Azb operation,” said Martin Reardon, a 21-year veteran of the FBI and the senior vice president of The Soufan Group, a strategic security and intelligence consultancy.

“However, the fact that the Pakistani Taliban is still able to conduct well-planned and effective attacks against both government and civilian targets, is a strong indictment against claims of success by the government,” he added.

According to Asad Ali, an Asia Pacific analyst with IHS Global Insight, the group’s ability to plan, organise and supply attacks has been disrupted by the military operation in the area.

“We see that the Pakistani Taliban’s capability has diminished over the past year as militants chose to target a PAF base, which has no aviation assets barring a helipad, as opposed to the more secure and fully functioning airports,” said Ali.

Hakimullah Mehsud became the commander of the Pakistani Taliban after the reported death of Baitullah Mehsud in 2009 in a US drone attack on his house in the Zangar area of South Waziristan. Hakimullah was also later killed by a US drone strike in 2013.

Maulana Fazlullah is the new chief of the Pakistani Taliban, appointed in 2013 following the death of Hakimullah Mehsud.

He was the mastermind behind the attack on the Army Public School in Peshawar that killed at least 141 people, including 132 children, to retaliate for the army offensive.

“We attacked the school as it was the army’s camp area and their training centre,” said Fazlullah in a video statement released soon after the attack in 2014. “We are at war with the army – if they kill us and our people, we will also kill them.”

Fazlullah was also behind the insurgency in Swat Valley and was accused of destroying about 200 schools, most of them for girls. He is best known as the “Radio Mullah” for the illegal radio station he operated in Pakistan’s Swat Valley in 2004.

The group has seen multiple factions parting ways with the leadership of the group over ideological differences. Yet, the target they want to achieve remains the same: to establish Islamic law across Pakistan.

“They are doing nothing but creating terror. The larger agenda has always been to upend the Pakistani state and impose themselves and run the country in a way that Afghanistan was under the Taliban rule,” Moeed Yusuf, the director of South Asia programmes at the United States Institute of Peace told Al Jazeera.

“Pakistan’s biggest problem is that it has a very strong military arm but the civilian arm is very weak, so it is a struggle to eradicate the Taliban. It’s not going to be easy.”

The Pakistani Taliban is known to be allied with several armed groups in Pakistan, including the Lashkar-e-Jhangvi, Lashkar-e-Taiba and Sipah-e-Sahaba Pakistan.

The group also claims allegiance to the Afghan Taliban, cooperating with its movements in Afghanistan.

“[The Pakistani Taliban] has an easy [way] to defend [its] mountain sanctuary along the Pak-Afghan border, which makes any military operation against them a daunting challenge,” said Reardon. 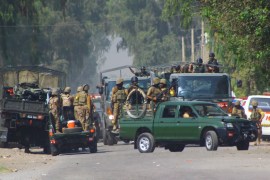 Afghanistan denies involvement in raid on Pakistan base

Islamabad blamed fighters from neighbouring Afghanistan for the attack on Badber military base that killed 29 people. 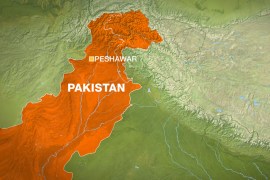 No claim of responsibility for attack on military convoy which left one soldier dead and two others injured.