Israeli fighter jets have struck two national security bases and an empty field in the Gaza Strip after rockets were fired earlier into southern Israel from the besieged territory.

One air strike targeted a national security base east of the Jabalia refugee camp in the north of the strip, moderately injuring one Palestinian, medical sources said on Saturday.

Another air strike hit a base east of Gaza city in the Zeitoun neighbourhood while a third hit an empty field in the north of the Gaza Strip in Beit Hanoun.

Earlier on Friday, a rocket fired from the strip struck a parked bus in the town of Sderot without causing casualties, Israeli police said.

An Iron Dome anti-rocket battery also shot down a rocket over the southern city of Ashkelon.

A group called the Brigades of Omar Hadidi, which is believed to be affiliated with the Islamic State of Iraq and the Levant (ISIL), claimed responsibility on Twitter for firing the Grad rocket at Ashkelon.

The incidents came as violence between Palestinian protesters and Israeli security forces spread beyond the walls of Jerusalem’s Old City on Friday, with at least eight Palestinians shot in clashes in the occupied West Bank and Israeli policemen injured by firebombs in a restive part of the city.

Hamas, which rules the Gaza Strip, had called for a “day of rage” over tensions at the city’s Al-Aqsa Mosque compound.

The new wave of violence started on September 13 when Israeli police stormed Al-Aqsa Mosque compound to arrest whom they called Palestinian “stone throwers”.

The Palestinian Red Crescent said eight Palestinians were seriously hurt after being shot by live rounds. About 20 were lightly hurt in clashes with Israeli soldiers, it said.

Two Palestinians were shot and wounded while throwing firebombs at Rachel’s Tomb in Bethlehem, police said.

Palestinians also clashed with Israeli forces in Hebron, Qalandia, and elsewhere in the occupied West Bank.

Since Israel captured East Jerusalem from Jordan in 1967, Jews have been allowed to visit – but not pray – at the compound.

Under an arrangement, Muslim authorities manage the site’s religious and civilian affairs under Jordanian supervision, while Israeli police oversee security.

Palestinians say that in the last two months, there has been a new development where Israel has intermittently restricted some Muslims from the compound when Jews visit.

Israel says this is to reduce friction, but Palestinians claim that Israel intends to establish Muslim-free Jewish visiting hours, which they fear could damage the fragile arrangement in place.

Salman told the leaders during his calls Thursday that “such aggression flagrantly violates the holiness of religions and gives a hand to fan extremism and violence in the entire world”, the report said. 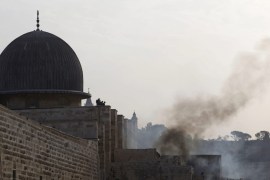