Four Israeli police officers have been wounded in clashes with Palestinian protesters in occupied East Jerusalem.

Friday’s clashes followed days of unrest at Jerusalem’s Al-Aqsa Mosque compound where Muslim men under the age of 40 have been banned from attending prayers.

Israeli police said that Palestinians attacked them with firebombs when they were trying to re-open a road that the protesters were blocking.

The new wave of violence started on September 13 when Israeli police stormed the Al-Aqsa Mosque compound to arrest whom they called Palestinian “stone throwers”.

The move sparked clashes, which have been continuing since.

Jerusalem Mayor Nir Barkat told the Jerusalem Post on Friday that the Palestinians “will pay a dear price” for their actions.

“The message I have to those causing the disorder is that they are endangering their own lives,” he said.

“We will prosecute them, and they will pay dearly.” 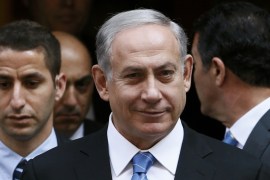 Netanyahu mulls minimum penalty, announces “significant fines” for Palestinian children, as well as for their parents.