By
Wladimir van Wilgenburg
Correction18 Sep 2015
This article originally stated that Wasim Abdo fled military conscription. He did not.

Erbil, Iraq – In recent months, European countries have been struggling to deal with the arrival of hundreds of thousands of refugees, many from Syria.

All Kurdish political parties in Syria, though, are calling on their brethren not to leave.

Some Kurdish regions of Syria have enjoyed relative stability compared to the rest of the country. The main Kurdish armed group in Syria, the People’s Protection Units (YPG), has controlled most of the country’s Kurdish-majority areas following the government forces’ withdrawal in July 2012.

Many Syrian Kurds, however, have left their homes due to the violence. In August 2013, thousands of people from Hasakah province fled to Iraq’s Kurdistan region. There are now almost 250,000 registered refugees from Syria in northern Iraq, according to data from the United Nations High Commissioner for Refugees (UNHCR).

In October 2014, 400,000 refugees from the Kurdish-majority city of Kobane fled to Turkey, after the Islamic State of Iraq and the Levant (ISIL) group besieged the city and slaughtered hundreds of its residents.

This year, many Syrian Kurds have tried to travel to Europe, and several have drowned in the attempt. Recently, civilians from Efrin, a Kurdish enclave near Aleppo, fled following clashes this summer between the YPG and the al-Nusra Front (Jabhat al-Nusra), a rebel group fighting against the regime of President Bashar al-Assad.

Few figures are available on the number of refugees from Erfin since the the phenomenon is quite recent.

They ban all the Kurds from Efrin to cross the border into Turkey. They just allow the Arabs to cross into Turkey through Efrin.

In an attempt to put an end to the exodus of refugees from the city, the local Kurdish administration has recently banned Kurds from leaving Efrin without permission, fearing there will be no one left to fight.

Local administration officials expressed concern about major demographic changes in the area, given the number of displaced Arabs from Aleppo, and Kurdish efflux to Turkey.

“They ban all the Kurds from Efrin to cross the border into Turkey. They just allow the Arabs to cross into Turkey through Efrin,” said Wasim Abdo, 28, a Kurd who left Efrin a year ago before the ban was imposed and now lives in Turkey.

The Democratic Union Party (PYD), which is affiliated with the Kurdistan Workers’ Party (PKK) in Turkey, has established three local administrations in Efrin, Kobane, and Hasakah province, which are protected by YPG forces.

But the administration’s struggle to provide jobs and services to the local population, and the mass migration, has led to disagreements between the PYD and the rival Kurdish National Council (KNC).

In the beginning of September, the KNC organised protests in several Kurdish cities in Hasakah province against migration, following the death of three-year-old Alan Kurdi and his family members during an attempt to cross the sea between Turkey and Greece.

When asked why the KNC organised protests following Kurdi’s death, Zara Salih, a UK representative of one

of the parties in the KNC, told Al Jazeera that the Kurdish parties in Syria are worried about demographic changes as a result of migration.

Salih blamed ISIL, the PYD, and the Syrian government for the phenomenon. “ISIL’s attacks and the danger of attacks against Kurds, and the PYD’s policy and rules such as the recruitment of young people to fight with them and put pressure on them, is not very different from the Baath regime,” Salih argued.

He was referring to laws adopted by the PYD administrations in Hasakah and Efrin requiring young men to serve in Kurdish armed groups for six months.

OPINION: We are missing the point about Syrian refugees

These laws have spurred men like 23-year-old Alan Deriki to flee his home city of Derik for Iraqi Kurdistan. “I did not want to join the YPG, but they forced me to join,” said Deriki. He added that cities in the Kurdish areas of Syria “are empty, without young people”.

Kamiran Sadoun, 35, lives in Erbil and said his family members from Derik are trying to send their sons outside of Syria now, fearing military service.

“A lot of people that do not support the YPG do not want to join their military service,” he told Al Jazeera in Erbil. “People are really afraid now.”

However, Abdulselam Mohammed, who works for the PYD administration in Hasakah province, denies that people are fleeing military service. He claimed that 90 percent of those who left the province departed three years ago for Iraq, before conscription began.

Meanwhile, some Syrian Kurds critical of the PYD’s policies also criticise the KNC for calling on people not to leave. “It’s a farce. Most of the KNC members and their families and their children live in Europe, and outside of Syria. And now they are asking Syrian Kurds not to leave,” said Abdo, 28. “It’s a shame,” he said.

Gharib Hesso, a PYD representative in Iraqi Kurdistan, told Al Jazeera that it is understandable that Syrians are leaving, given the current conditions.

Nevertheless, he said “propaganda” spread on social media “encourages people to leave and say that Europe opened its doors … But the safest area in Syria is Rojava [Kurdish area of Syria]. A lot of Arabs come to Rojava because of safety and security there”.

“In Rojava, people can continue to work and live their daily lives; the people are not starving,” he said.

The PYD official called on Europe to send Syrian Kurds help instead. “They can send us aid or assistance. We are living under an embargo and war,” said Hesso. 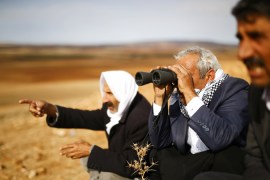 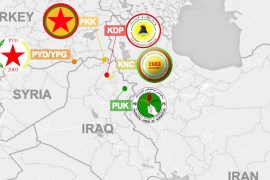 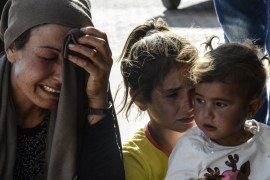 Activists say ISIL fighters expelled from Kurdish town, a day after they killed hundreds in apparent act of vengeance.