Under a new immigration law which has come into effect following the failure of European Union ministers to agree on a common strategy, refugees face deportation and jail terms if they enter Hungary illegally.

Hungary is on the front-line of Europe’s refugee crisis, with almost 200,000 people travelling up from Greece through the western Balkans and entering the country this year, most of them seeking to travel on to Germany.

On Monday, Hungary closed the main crossing with Serbia and more states imposed border checks in the face of the continent’s ongoing refugee crisis.

Hungary will also reject asylum seekers entering from Serbia who have not previously sought asylum in its southern neighbour, a government spokesperson said.

“Certainly, as that is the international legal rule, therefore it must be done that way,” Zoltan Kovacs said at Hungary’s southern border with Serbia when asked if such refugees would be turned back.

With Europe’s 20-year-old Schengen passport-free zone feeling the pressure, Austria and Slovakia said on Monday they would follow economic powerhouse Germany’s lead in reinstating border controls to deal with the flow of people.

Poland said it was considering similar steps while the Netherlands said it would have “more patrols” on its frontiers.

Long traffic jams built up on the Germany-Austria border and refugees were left stranded on non-EU Serbia’s side of the frontier with Hungary in the latest chaotic scenes from the biggest such crisis since World War II.

Amid opposition from eastern states, EU ministers failed to reach an agreement on a plan to share out 120,000 refugees and ease the burden on front-line states from the tide of people fleeing war zones like Syria and Afghanistan.

“We did not have the agreement we wanted,” Dimitris Avramopoulos, EU migration commissioner, said after Monday’s emergency meeting in Brussels, adding that they hoped to reach a deal in October.

More than 430,000 people have crossed the Mediterranean Sea to Europe so far this year, with 2,748 dying, and more coming every day.

It is not just Hungary which is reeling from the refugee flow through Europe.

Other countries are now feeling the strain too, and Germany shocked its EU partners on Sunday when it admitted that it had to reinstate border controls eliminated under Schengen in the late 1990s to cope with the influx.

Vice Chancellor Sigmar Gabriel said there were “many signs that Germany this year will take in not 800,000 refugees, as forecast by the interior ministry, but one million”.

Al Jazeera’s Jacky Rowland, reporting from Brussels on Monday, said Germany’s decision had set a “precedent” for others to follow.

“Until now people have been able to travel without having to show any documents as long as they were coming from another EU country,” she said.

RELATED: Orban, Hungary and the walls of Europe

“Freedom of movement is one of the principles that has been at the heart of the EU, and it’s a privilege that is particularly valued by the more recent members of the EU in Eastern Europe.”

Austria and Slovakia took advantage of the U-turn by Chancellor Angela Merkel’s government – which had previously said it would throw open its doors to Syrian refugees – to reinstate their own border checks.

“We will proceed as Germany did,” Johanna Mikl-Leitner, the Austrian interior minister, said in Brussels.

Poland said it will impose border controls at the first sign of “any threat” while the Netherlands promised “more” patrols.

EU states can impose temporary controls for security reasons under the Schengen treaty but there are fears the very ideal of a borderless Europe could collapse.

Divisions were also rife over the plan unveiled last week by the European Commission – the EU’s executive – for binding quotas to redistribute 120,000 refugees.

Hopes of a unanimous deal collapsed in the face of opposition from Hungary, the Czech Republic, Slovakia and Romania at the crisis meeting in Brussels, officials said.

“There was no consensus, several countries disagreed,” Robert Kalinak, Slovakia’s interior minister, was quoted as saying by the Czech news agency CTK after the crisis talks.

He said it was “crucial” for EU leaders to have a special summit on the issue.

“There was no consensus, several countries disagreed. It was not only us or the Czech Republic, but other countries as well.”

However, the EU ministers formally approved a plan first aired in May to relocate 40,000 refugees.

They also approved plans for military action against people smugglers in the Mediterranean, seizing and if necessary destroying boats.

With the human side of the crisis prompting a wave of sympathy, the aunt of drowned Syrian toddler Alan Kurdi, whose body was washed up on a Turkish beach two weeks ago, travelled to Brussels to lobby the politicians.

“Open your heart and take action and come up with a shared plan,” Teema Kurdi said.

Tragedy struck again off the coast of Greece on Sunday, with 34 more refugees – including four babies and 11 children – drowning when their boat capsized in high winds.

France on Monday announced it would send a frigate to join EU efforts to tackle the people smugglers off the coast of Libya.

“There is a humanitarian obligation to save human lives … there is also an obligation to react against those seeking to profit from this inhuman situation,” Jean-Yves Le Drian, the French defence minister, said. 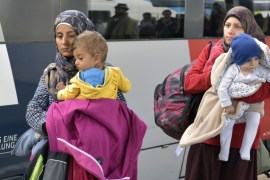 Refugee crisis is a story of children’s resilience

Many who have travelled to Europe are children and their resilience in the face of adversity would put adults to shame. 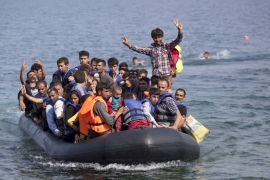 The billion-dollar business of refugee smuggling

We explore the economic cost of refugee trafficking and how to protect aid money from being abused by corrupt regimes.