Hundreds of Tunisians have demonstrated against a controversial draft law on amnesty for corruption offences, defying a ban on protests under state of emergency.

The draft law on economic reconciliation is a centrepiece of the new government’s programme and seeks to boost the economy by clearing cases against businessmen and civil servants accused of corruption.

Opponents of the law, however, see it as an attempt to whitewash the crimes of the old regime and ignore an ongoing process of transitional justice through the Truth and Dignity committee.

The demonstrators on Saturday included supporters of the leftist Popular Front coalition, members of a citizen’s group called “No, we will not forgive” set up after the bill was announced.

“No to reconciliation that whitewashes corruption,” said one placard protesters brandished on Habib Bourguiba Avenue, hub of the revolution that ended a 23-year dictatorship in 2011.

“The people own the street – not afraid and not terrorised,” demonstrators chanted during the peaceful protest.

Authorities have kept the key avenue in the capital closed to traffic for several days because of what they call “terrorist threats”.

There was a large security presence there on Saturday, with many police and National Guard officers, both in uniform and plain-clothed.

He has called on parliament to adopt the law pardoning people charged with or convicted of financial corruption if they confess and return any money obtained.

The draft law has many critics in both political parties and civil society.

Sallemi, a 55-year-old protester who did not give his surname, said he came all the way from the central city of Gafsa to vent his anger.

“I took out loans for everything, my house, my fridge. No one cancelled those loans, and now they want to pardon [the corrupt],” he said.

Corruption was endemic under longtime dictator Zine El Abidine Ben Ali, who was driven from power nearly five years ago and whose close circle, especially his wife’s family, had an iron grip on the economy.

Several people have been jailed on corruption charges or have fled the country.

Demonstrations against the law have taken place in several cities, and police dispersed a September 1 protest in Tunis.

The interior ministry had warned that Saturday’s protest was illegal and that “the law will be applied”.

A state of emergency, under which such gatherings are outlawed, was reintroduced in the aftermath of an armed attack in June that killed 38 tourists at a beach resort. 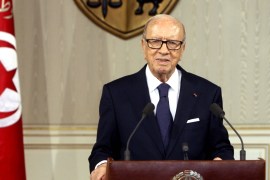 Proposed legislation could grant amnesty to many who benefitted from the previous regime, critics say. 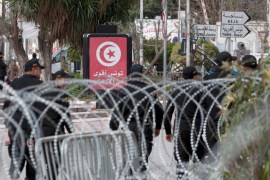 Traffic banned in parts of Tunis due to bomb threat