Thousands of additional people seeking asylum in Western Europe have pushed through police lines at Austria’s main border crossing with Hungary and set off on foot on the highway towards Vienna.

They began their march after rail traffic was sharply reduced due to overcrowding, despite moves by authorities to compensate for that at the Nickelsdorf crossing, the Associated Press news agency reported.

Police spokesman Helmut Marban said there was “some kind of group dynamic” that started with a few people beginning to walk towards Vienna and quickly developed into a large movement of people.

Regularly scheduled trains from Nickelsdorf continued to other Austrian destinations, including Vienna, with three departures scheduled. But the railway company announced an end to special shuttles between Nickelsdorf and Vienna that had been running for days. Buses and taxis were called to Nickelsdorf to take refugees to the Austrian capital.

Refugees also continued to enter from Serbia to Hungary, the last stop before reaching Western Europe, on Friday, walking along railway tracks.

Families with little children were sitting on the ground at Hungary’s Roszke crossing, sharing food donations and taking care of their youngest family members while taking a rest during their march.

At a station in Roszke, where refugees are temporarily held, the wife of an Austrian politician has filmed the chaos as police threw food to refugees, saying that they were being treated like “animals”.

Hungary has recently increased the number of soldiers building its anti-refugee border fence in order to speed up the construction process.

The country wants to erect the sharply-criticised fence along its border with Serbia as it struggles to cope with huge numbers of refugees travelling up from Greece and the Balkans.

Foreign Minister Peter Szijjarto said on Friday that the number of refugees entering the country could rise to 400,000 to 500,000 by the end of the year.

More than 170,000 migrants, many of them refugees from conflicts in the Middle East, have been recorded entering Hungary so far this year.

Vast majority of them are heading towards Germany via Austria.

In a statement on Friday, Peter Salama, UNICEF’s regional director for the Middle East and North Africa, said that millions more in Syria could become refugees and head to Europe if there is no end to the war.

More than 430,000 refugees and migrants have crossed the Mediterranean to Europe so far in 2015, a record number that is more than double the total for the whole of last year, the International Organization for Migration said. 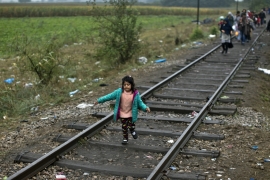 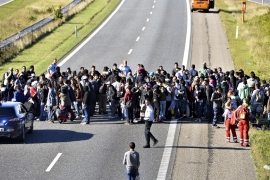 At least 3,300 refugees were taken to camps on Wednesday for processing after crossing the Serbian-Hungarian border.