Myanmar President Thein Sein has made his first public appearance since the start of a campaign for November 8 general elections, meeting leaders of ethnic armed groups for ceasefire talks.

At the opening of the talks in the capital Naypyitaw on Wednesday, Thein Sein stressed the importance of peace in the country’s “transition to democracy” through peace.

“I hope today’s summit will pave the way to signing the nationwide ceasefire agreement by the end of September,” he said.

Related: Will Myanmar election be free and fair?

Clinching the deal with the armed groups would be a political win for Thein Sein, who made it his top priority, boosting the chances of his ruling Union Solidarity and Development Party in the first general elections since the end of military rule.

He said that he wants the ceasefire signed by September 29. Other reports said it the agreement could be signed at the beginning of October.

Al Jazeera’s Florence Looi said the former military commander has been “genuinely trying” to push through a ceasefire agreement.

“It’s something his administration has been working hard on,” she said.

While some experts expressed doubt about a deal, others said a deal has been reached with the competing rebel factions.

Representatives of five main groups from about 16 participating in the talks met Thein Sein.

In a statement, rebel leaders called for an “all-inclusive” agreement with the government, saying it is “inconceivable” for any deal that excludes certain key rebel groups.

The president is not running in the elections, but the Myanmar constitution allows politicians, who select the president, to vote in a person from outside parliament, so giving Thein Sein a chance for re-election.

The draft of the agreement was hammered out during almost two years of gruelling negotiations, but ethnic armed groups have refused to sign it, urging the government to amend the constitution and grant ethnic minorities more autonomy.

Tension between Myanmar’s ethnic minorities and the majority Burmans, who dominate the government, has prompted many groups to take up arms and fight the military on the fringes of the country since independence in 1948.

Myanmar opposition leader Aung San Suu Kyi last week urged the rebels not to rush the deal, but work slowly on a pact to ensure lasting peace and stability.

She said all groups should be included in the accord.

Suu Kyi’s National League for Democracy is expected to win the election.

Thein Sein’s USDP won the last general poll held under military rule in 2010, widely condemned as rigged in its favour. The USDP is now likely to lose many seats.

In the first showdown of the election campaign, Suu Kyi will on Thursday meet voters in Kayah state, where powerful Minister of the President’s Office Soe Thein, the architect of Thein Sein’s economic reforms, is running for a seat in the election. 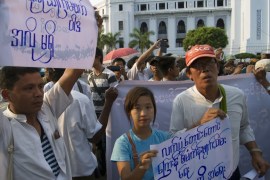 What’s the likelihood of Myanmar’s army disciplining itself to fulfil its obligations under international law?