Arab coalition jets have bombed Houthi positions in the Yemeni capital, Sanaa, stepping up attacks in the wake of a deadly missile strike on its troops, according to witnesses.

Military bases north of the city, including a munitions factory of the Republican Guard loyal to Saleh, were also targeted, they said.

The pro-government coalition has intensified its air raids against Houthi positions since a missile strike killed 60 Gulf Arab soldiers on Friday in Marib, east of Sanaa.

Yemen is torn between the Houthis, who are allied with army units loyal to Saleh, and the loyalists of exiled President Abd-Rabbu Mansour Hadi, who is backed by the Arab coalition.

More than 4,500 people have been killed by fighting and air strikes since the beginning of the conflict, which has also led to disease and hunger in Yemen. 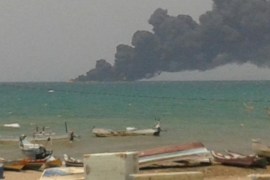 At least 22 people, majority of them Indian fishermen, killed in Hodeidah while 12 Houthis killed in separate attacks. 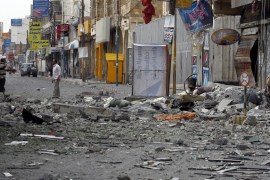 Strikes come one day after 60 Gulf soldiers, including 45 Emiratis, were killed in an attack in central Yemen.