Pope Francis has radically reformed the Catholic Church’s process for annulling marriages, allowing for fast-track decisions and removing automatic appeals in a bid to speed up and simplify the procedure.

Francis published the details of the reform on Tuesday, regulating how bishops around the world determine when a fundamental flaw has made a marriage invalid.

In a letter to believers, the Argentinian pontiff said annulments would require approval by only one church tribunal, rather than two as currently needed.

According to church laws, Catholics must get this church annulment if they want to remarry in the church.

Without the annulment, divorced Catholics who remarry outside the church are considered to be adulterers living in sin and are forbidden from receiving communion – a dilemma at the core of a current debate roiling the church.

The process of annulment has long been criticised for being complicated, costly and out of reach for many Catholics.

The biggest reform involves a new fast-track procedure, handled by the bishop himself, that can be used when both spouses request an annulment.

It can also be used when other proof makes a more drawn-out investigation unnecessary.

Francis also called for the fees to be waived, except for the “just” payment of tribunal personnel.

How the pope's annulment reform will recalibrate the Synod of Bishops, and more: http://t.co/964ZXOt1QG

Catholics have long complained that it can take years to get an annulment, if they can get one at all. Costs can reach into the hundreds or thousands of dollars for legal and tribunal fees.

Francis had already called for annulments to be free, saying all Catholics have the right to justice from the church.

He has also said the church should take into account that ignorance of the faith can be a reason to declare a marriage invalid.

Francis has previously quoted his predecessor as Buenos Aires archbishop as saying half of the marriages that are celebrated are essentially invalid because people enter into them not realising that matrimony is a lifelong commitment.

Norms attached to the new law say that the “lack of faith” can be a cause for an annulment. 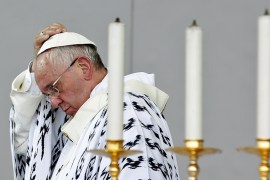 Francis’ visit also aimed at rallying nation’s Catholics, whose numbers are down to 79 percent from 95 percent in 1970. 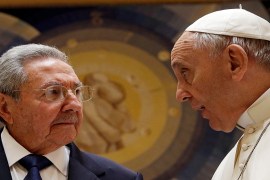 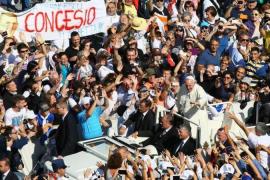 Pro-gay groups slam Vatican for backtracking over gays and divorcees, despite Pope urging the Church to accept “change”.