Guatemala appears set for a presidential run-off in October after early results from Sunday’s poll showed no candidate receiving close to the 50 percent of ballots needed to win the election outright.

Baldizon is followed closely by former first lady Sandra Torres, who has 17.9 percent.

Electoral officials said early signs showed the turnout was high, at 80 percent, though official confirmation was not expected until later, the Associated Press news agency reported.

A run-off between the top two candidates would take place in late October.

Al Jazeera’s Daniel Schweimler, reporting from Guatemala City, said there was deep distrust among Guatemalans towards the political elite.

“They want a clean politician emerging from all of this to lead them through what will be a very difficult time.”

Most of the candidates running were old-guard figures picked to run before energised prosecutors backed by a mass anti-corruption movement toppled Otto Perez Molina’s administration.

Many voters were so sceptical that they campaigned for the election itself to be postponed to give them a new crop of choices.

Perez Molina resigned as president and was jailed on Thursday following a corruption investigation.

Some critics urged voters to go to the polls wearing black clothes of mourning, abstain, or cast null ballots. 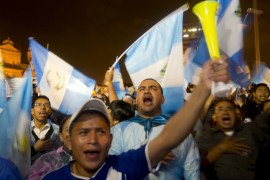 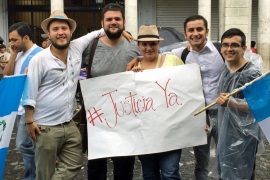