The Islamic State of Iraq and the Levant (ISIL) group has battled Syrian rebel forces in a southern district of Damascus, bringing ISIL fighters within about 5km of the centre of the capital.

ISIL fighters on Monday night waged street battles against a loose coalition of Syrian rebels in Asali, part of the southern Qadam district, after seizing two streets there over the weekend, a monitoring group and ISIL-affiliated media reported.

“This is the closest ISIL has ever been to the heart of Damascus,” said Rami Abdel Rahman, the head of the UK-based Syrian Observatory for Human Rights.

He said the fighters had advanced from the adjacent al-Hajar al-Aswad neighbourhood, where they have been based since July 2014.

The ISIL-affiliated news agency, Aamaq, said the fighters had taken over buildings in Qadam and killed 15 rebels.

Rebels, who control several districts in southern Damascus, are battling on two fronts, ISIL from the south and troops belonging to the regime of President Bashar al-Assad from the north.

Opposition-held Qadam has been relatively quiet since a truce there a year ago between rebel groups and regime forces, who still have a strong grip over the centre of the capital.

A Syrian regime military official confirmed the latest clashes and said he was “very happy that they are fighting”.

“But we are ready to react if they try to advance into government-held territory,” the official told the AFP news agency.

Since rebels pushed back ISIL from the Damascus suburb of Eastern Ghouta last year, ISIL has used Al-Hajar Al-Aswad as a base for attacks on the capital.

Eastern Gouta continues to be hit by Syrian regime warplanes.

Al Jazeera’s reporter in the Damascus suburb said 10 civilians were killed on Monday by air strikes on a marketplace in the village of Ein Tarma.

Renewed strikes on the main marketplace in Douma, also located in the Eastern Ghouta region, killed 14 people, including children, the reporter added.

More than 240,000 people have been killed in Syria’s conflict, which began with popular anti-government protests in March 2011 but has evolved into a protracted civil war.

The conflict has seen the embattled regime of President Assad lose swaths of territory across the country. 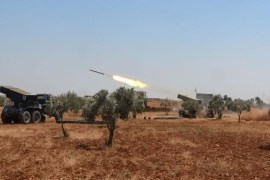