“The situation of migration phenomena outside and inside the European Union has recently taken unprecedented proportions,” a statement from Luxembourg, which holds the EU’s six-month rotating presidency, said on Sunday.

“In order to assess the situation on the ground, the political actions under way and to discuss the next steps in order to strengthen the European response, the Luxembourg Minister for Immigration and Asylum Jean Asselborn decided to convene an extraordinary JHA [justice and home affairs] council,” the statement said.

The announcement for the meeting of the EU’s 28 member states came after a joint call for the talks by Germany, France, and Britain earlier on Sunday.

Germany’s Thomas de Maiziere, Britain’s Theresa May and France’s Bernard Cazeneuve held talks on Saturday on the issue, on the sidelines of a meeting in Paris on transport security.

The trio “underlined the necessity to take immediate action to deal with the challenge from the migrant influx”.

They also called for reception centres to be set up urgently in Italy and Greece in order to register new arrivals, and for a common EU list of “safe countries of origin” to be established.

Germany, which is expecting to receive 800,000 refugees this year, has been pushing for such a list, arguing that it would free up resources to help those fleeing war and persecution.

The number of refugees reaching the EU’s borders reached nearly 340,000 during the first seven months of the year, up from 123,500 during the same period in 2014, according to the bloc’s border agency Frontex.

The changes include the tightening of borders and returning the refugees to Serbia, the last border they crossed.

Al Jazeera’s Andrew Simmons, reporting from Budapest, said hundreds of refugees were now stranded in the capital with nowhere to go.

“Hungary’s government is ignoring all criticism of how it’s handling this crisis. It stands accused of stripping away the rights of refugees and it is preparing a raft of new legislation which could mean thousands of refugees are sent back to Serbia.

“Nearly all of the refugees here have crossed from Serbia. Hungary is defining its neighbour as a safe third country, one of several changes,” Simmons said.

The changes mean that asylum seeker who crossed from Serbia will have no valid claim in Hungary, Gabor Gyulai of the Hungary Helsinki Committee said.

Annastiina Kallius, a volunteer of rights group Migrant Solidarity, said she was in Budapest to advise refugees on their journeys.

“We cannot only blame the smugglers because we are giving an incentive for the smugglers. We are giving them better business by not letting them [refugees] take the train,” Kallius told Al Jazeera.

Some 10,000 people are estimated to have crossed over the Serbian border into Hungary in the last week alone, as growing numbers of refugees continue their journeys across Europe.

At a park in the centre of Belgrade, more and more people are arriving by the hour. They get something to eat, rest a little and prepare for the next leg of their journey into Hungary.

Hungary has now completed a four-metre-high fence along its border with Serbia and is working to build another one, and while many refugees say the journey to Serbia has been relatively problem free, they do fear what awaits them at the border.

“Other people who went ahead of us were told by Hungarian officials that if they didn’t give a finger print, they would be hit and thrown in jail. Now we are scared to go to Hungary,” said Lokman, a Syrian refugee. 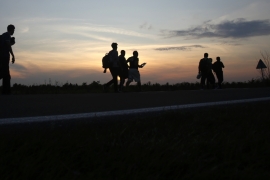