Sistani, 85, said that the government must show it is serious about fighting corruption and improve services – not just introduce temporary measures to placate the public.

In a message delivered by a representative in a Friday sermon, Sistani also cautioned protesters who have staged weekly rallies to press demands for reform that they must guard against groups seeking to hijack their movement to further other interests.

The comments, delivered in the holy Shia city of Karbala south of Baghdad, came just hours before tens of thousands of Iraqis gathered in Baghdad’s Tahrir Square to demand better services and an end to corruption.

A senior security official called the demonstration the biggest protest of the summer. Thousands more rallied in Najaf, Basra and other cities across the Shia southern heartland following a call from powerful Shia cleric Moqtada al-Sadr.

Al Jazeera’s Zeina Khodr, reporting from the Iraqi capital, said the protests had begun as a grassroots movement, with people frustrated about electricity shortages.

“Now it has become a popular uprising demanding change. They want Prime Minister haider al-Abbadi to reform the poltical system in the country,” she said.

“We cannot call these protests ‘anti-government,’ at least not for now, because these people are taking to the streets to give Abbadi support to push ahead with reforms.”

He has also ordered a revision of the government’s pay scale and the annulment of financial perks enjoyed by senior officials, politicians and consultants.

On Friday, he directed military commanders to ease civilian access to the Green Zone, the central Baghdad district home to many government buildings and several Western embassies.

The 10-square-kilometre area on the bank of the Tigris River once housed the headquarters of the US occupation and before that one of Saddam Hussein’s republican palaces.

Checkpoints and concrete barriers have blocked bridges and highways leading to the neighbourhood for years, symbolising the isolation of Iraq’s leadership from its people and wreaking havoc on traffic in the city of 7 million people.

Abbadi also ordered the elimination of no-go zones set up by militias and political parties in Baghdad and other cities in response to more than a decade of car bombings.

The weekly rallies, which began last month, have been pressing for better basic services like power, water and medical care, as well as an end to corruption and sectarian politics.

Corruption is widely believed to be rampant, involving hundreds of millions of dollars in the 12 years since Saddam Hussein’s government was toppled. 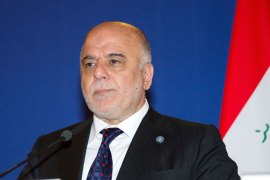