Police firing tear gas, rubber bullets and water cannons have battled thousands of Lebanese protesters in the capital demonstrating against government corruption and political dysfunction amid a rubbish collection crisis.

Riot police on Saturday used batons to beat back protesters in central Beirut, while others were carried away, overcome by tear gas.

An online group calling itself “You Stink!” and other civil society groups organised the rallies, calling on Lebanese to join them in a revolt against a corrupt system.

Shots were echoing through the streets of the capital Beirut into the night, but it was not immediately clear if this was live fire, blanks, or rubber bullets.

“The people want to topple the regime!” protesters cried out, a slogan used during the Arab Spring protests that swept through the region in 2011.

Lebanese Red Cross spokesman George Kattaneh told the AP news agency that at least 15 protesters were wounded, and one of them was in a critical condition.

Kattaneh said the number of injured was likely to rise as security forces continued to battle with protesters.

Police said 35 officers were wounded as they tried to disperse protesters trying to break into a security zone near parliament and the government building.

Saturday saw the biggest demonstrations by far since rubbish began piling up on the streets after the capital’s main landfill was closed a month ago.

Nour Samaha, reporting for Al Jazeera from Beirut, said more than 4,000 people had joined the protest, adding that about 1,500 people remained on the streets by 10pm local time.

“Protesters are calling the security forces ‘shabiha’ [thugs] for their heavy handed action against the protest,” she said.

Demonstrators said they planned to stay near the government building and parliament through the night.

“We want to live in our country,” read one poster carried by a protester. Another read: “Some trash should NOT be recycled,” written in red above photos of Lebanese politicians.

The government has been unable to find an alternative system for waste management, amid government paralysis and bickering among politicians.

Some residents have resorted to burning rubbidh on the streets, sending toxic fumes over the city’s skyline and into homes.

The health minister has warned of a catastrophe as some have started dumping waste in valleys, rivers and near the sea. 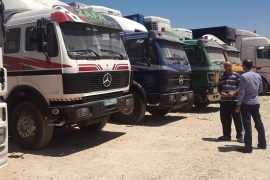 The Lebanese government has approved a subsidy to help export companies after the closure of the Jordan-Syria border. 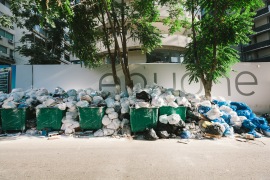 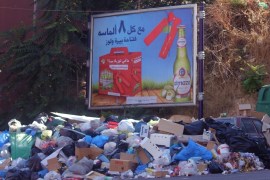