The conflict in Yemen has killed nearly 400 children since the end of March, and a similar number of children have been recruited by armed groups, according to a new report by the UN children’s agency.

UNICEF’s report released on Wednesday, says that 398 children have been killed and 377 others have been recruited to fight since the Saudi-led coalition began air strikes in Yemen.

“This conflict is a particular tragedy for Yemeni children,” Julien Harneis, UNICEF Representative in Yemen, said.

“Children are being killed by bombs or bullets and those that survive face the growing threat of disease and malnutrition. This cannot be allowed to continue,” he added.

The UN said that as devastating as the conflict is for the lives of children, it will have terrifying consequences for their future.

On Wednesday, Amnesty International, said that all sides fighting in Yemen have left a “trail of civilian death and destruction” in the conflict, killing scores of innocent people in what could amount to war crimes.

Overall, the UN human rights office said on Tuesday, at least 1,950 civilians have been killed in the fighting and 1,3 million others have fled their homes.

The UN and aid groups have called repeatedly for ways to get food, fuel, medicine and other supplies into Yemen, but tight restrictions imposed by the coalition on air and sea transport remain in place, while Yemen’s exiled government accuses the Houthis of hijacking aid.

Yemen is the poorest country in the Arab world, and its population relies on imports for about 90 percent of its supplies. Attempts at UN-brokered humanitarian pauses to bring in aid have failed.

The new UNICEF report says about 10 million children, or half of the country’s population, need urgent humanitarian assistance. 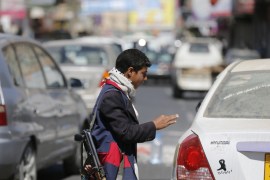