A bomb blast on Monday tore through a shrine in the commercial centre of the Thai capital, killing at least 20 people and injuring scores.

Journalist Maher Sattar, who was at the scene of the Erawan Shrine shortly after the blast, spoke to some of the people who witnessed the explosion.

Eric Seldin was 100 metres away when the bomb exploded

“I was inside the Hyatt hotel having dinner when we heard an extremely loud explosion near the Ratchaprasong intersection.

The windows were shattered and everyone at the hotel was startled.

Security tried to shut down the hotel and attempted to keep everyone inside but I was able to go out and walk just about 50 metres close to the intersection.

I noticed seven to eight covered bodies. There was damage to the ground of the shrine.

On the street itself there were several casualties. There is a large security presence. Police are moving people back because they are worried about the second explosion.

The area is extremely close to the National Police Headquarters and the police hospital.”

We live near here. We didn’t think it would be a bomb, we thought something else had happened.”

“I heard something that sounded like thunder. But it turned out to be something much worse – something that never should have happened. So a bunch of us motorcycle taxi drivers who were by the intersection went into a hotel nearby to hide.

When we heard there was an explosion we became frightened, and each of us went to find out own hiding spaces.

After the explosion there was silence. Then we all went out to see what had happened. We saw body parts scattered all over – corpses of people… we couldn’t tell what nationalities they were.

At first we saw that five people had died – then it turned out to be more than we had expected. It felt like something that shouldn’t have happened – right in the heart of the city. We don’t know why it happened, but of course everyone is frightened now.”

“This doesn’t affect me that much, I’m pretty used to all this – I’ve seen the red shirt protests, I’ve seen bombs in telephone booths.

I was nearby when I heard the blast – I thought it was thunder. Then I walked back and someone told me it was a bomb – I was shocked.” 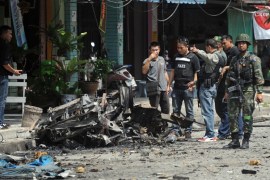 One of Thailand’s most popular tourist islands targeted for the first time in attack that injures at least seven people.