An Indonesian passenger plane that crashed at the weekend in Papua was transporting about 6.5 billion rupiah ($470,000) in cash to distribute to poor families in the eastern province, a post office official has said.

“Four of our personnel were escorting the funds,” said Haryono, the head of Jayapura post office, who goes by one name. The money was in four bags, he added, according to the AFP news agency.

An Indonesian search and rescue plane spotted debris believed to be from the aircraft that went missing on Sunday with 54 people on board in Papua province.

The wreckage thought to be from the Trigana Air Service plane was sighted on Monday morning in the heavily-forested Bintang Mountains region, local police chief Yunus Wally said.

Al Jazeera’s Step Vaessen, reporting from Jakarta, said a rescue plane had identified smoking wreckage and another smaller plane was on its way to get a closer look.

“At the same time two teams have gone overland but it’s a very mountainous area and they’re not sure how long this journey is going to take to get there,” our correspondent said.

A helicopter may also be sent – depending on what the smaller plane finds – to see if it is possible to land near the crash site.

The Trigana Air Service ATR 42-300 plane’s disappearance is the latest in a string of aviation disasters in Southeast Asia.

The passengers on the plane, reported to be an ATR-42 model, include 44 adults, two children, three toddlers and five crew members.

Hours after the plane’s disappearance, villagers in eastern Indonesia’s Papua region claimed to have found the wreckage, the transport ministry’s director-general of air transportation, Suprasetyo, who goes by one name, said.

“The plane has been found [by villagers]. According to residents, the flight had crashed into a mountain. Verification is still in process,” Suprasetyo said.

According a tweet by Indonesia’s National Agency Search and Rescue agency, the aircraft lost contact while flying over the remote eastern Papua region at 2:55pm local time.

The plane had been scheduled to land at a small airport in Oksibil around 3pm local time (06.00 GMT).

Oksibil is a remote town near the country’s border with Papua New Guinea.

Our correspondent said reports indicated that “the weather was very bad” in Papua at the time the plane was in the air.

“It is also known as quite a spooky area to fly in and planes go missing there.”

On Wednesday, a Cessna propeller plane operated by Indonesian company Komala Air crashed in Papua’s Yahukimo district, killing one person and seriously injuring the five others on board.

Officials suspect that the crash was caused by bad weather. 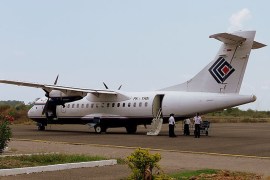 Villagers say they have found the wreckage of a plane which earlier went missing with 54 people aboard. 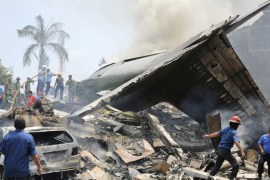 All 122 people on board and several others on ground killed as aircraft hit empty residential buildings in Medan city. 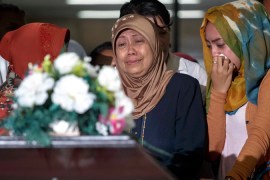 Woman buried in Surabaya cemetery was one of 162 people on board Flight QZ8501 which crashed into Java Sea on Sunday.