Forces loyal to Yemen’s exiled government have made advances in Taiz, the country’s third city, taking over the security headquarters and the governorate building there, following heavy clashes with Shia Houthi fighters.

Fighters backing the exiled president, Abd-Rabbu Mansour Hadi, were reported on Saturday to be inching closer to the presidential palace in the city, located southwest of the capital Sanaa, and military bases still under the control of Houthi rebels, army sources said.

A military source told Al Jazeera that at least 22 fighters were killed in the fighting in Taiz, which analysts regard as a gateway to Sanaa, the capital city which was overrun by the rebels earlier this year.

Al Jazeera’s Hamdi al-Bakari, reporting from Yemen, said the Houthis were still in control of three important brigades in the city.

The advances by the forces backing Hadi have been aided by weapons and troops from Yemen’s Gulf neighbours, as Saudi-led coalition warplanes continue to pound rebel positions.

Troops loyal to Hadi on Saturday also announced that they had gained control of Shabwa, the fifth southern province they have take over in the past month.

The Houthis “withdrew” and “handed over” Shabwa to the pro-government forces after they were promised a safe route out of the province, a military official told the AFP news agency.

“The province was handed over” to the Southern Movement, a secessionist group whose fighters have been fighting in loyalist ranks, said Salem al-Awlaqi, a political activist in Shabwa.

Military officials said this week that the pro-rebel governor of Shabwa – which has substantial oil reserves – had fled as loyalist forces had prepared to enter the province.

They also accused the rebels of planting landmines in government buildings across Shabwa, as they had done in other provinces before fleeing.

Loyalist forces in the south launched an offensive last month against the Houthis, forcing them out of main southern city Aden in mid-July. They subsequently retook Daleh, Lahj and Abyan provinces.

Military sources say the coalition has provided Hadi’s supporters with modern heavy equipment in recent weeks, including tanks and personnel carriers, as well as Yemeni soldiers trained in Saudi Arabia.

The conflict has cost nearly 4,300 lives since March, half of them civilians, according to UN figures, while 80 percent of Yemen’s 21 million people need aid and protection.

Aid workers in the south told AFP that aid groups from Saudi Arabia, the UAE and beyond had begun distributing much-needed food and other supplies to residents in Aden and nearby areas.

A Saudi plane carrying 10 tonnes of medical aid landed at Aden on Saturday, the official SPA news agency reported, adding that this was the seventh aid flight to the city since July.

Since the oil-rich kingdom announced the forming of the anti-rebel coalition, Saudi Arabia has pledged $540 million in aid to Yemen. 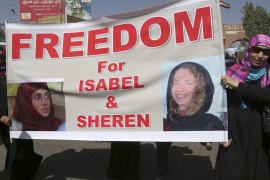 French aid worker Isabelle Prime was held hostage by gunmen for more than five months before being released. 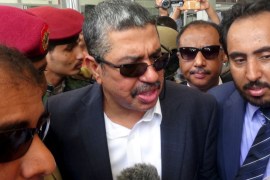 Khaled Bahah arrives in war-torn port city as WFP distributes supplies to citizens who are desperately in need of aid.