A general strike by a broad coalition in Ecuador upset with President Rafael Correa has virtually paralysed the capital, Quito, provincial cities and stretches of the Pan-American Highway.

Thousands of indigenous activists, unionists, environmentalists and members of the political opposition blocked roads on Thursday with tree trunks, rocks and burning tyres.

Public transport was scarce in Quito and major thoroughfares were blocked in Guayaquil, Cuenca and other provincial capitals.

There were no reports of serious violence. Police fired tear gas at one point in a vain attempt to dislodge indigenous protesters on the Pan-American Highway near the Cotopaxi volcano.

Protesters criticised proposed constitutional changes that would let Correa run for office again, without calling for a public referendum on the matter.

Milton Gualala, a legislator from Zamora-Chinchipe province, told Al Jazeera: “We demand the National Assembly to eliminate the constitutional amendments.

“What they are up to is reforming the constitution to guarantee Correa’s indefinite re-election.

“If he wants to do that, he has call for a referendum.”

Facing the first national strike against him in eight years in office, Correa blamed the far right, his usual nemesis.

In remarks to a youth group, he called on supporters to clear the streets.

“These things must be rejected, not by the security forces but by the citizenry,” Correa said of the barricades.

“A small group is trying to impose its policies on us.”

However, Carlos Perez, president of the Conferation of Kichwa People, said the groups had declared an “uprising” and that Correa did not represent them any more.

“We voted for him, but he sold us illusions and dreams. Now we have woken up from a nightmare,” he told Al Jazeera.

“For more than eight years we have waited but now we say enough, Correa changes or has to resign.”

It is united chiefly by a rejection of pending legislation that would permit Correa’s indefinite re-election when his third term ends in 2017.

Correa’s popularity derives from generous government spending on social welfare and infrastructure including highways, but his support level in opinion polls is now at its lowest ever – 45 percent.

Indigenous groups are upset by Correa’s refusal to consult them on mining and oil exploration on traditional lands.

Union activists are angry at a new labour code that they see as stripping them of freedom of association and protest.

Business people are upset by new taxes, including import tariffs and a 75 percent tax on real estate sales and inheritances that Correa announced but then suspended after a public outcry.

Ecuador is heavily dependent on oil revenues and Correa has faced mounting protests since this year’s plunge in crude prices forced him to impose cost-cutting measures.

Correa’s governing style and attitude towards dissent have drawn steady complaints from international human rights groups, who accuse him of stifling of free speech and an independent judiciary. 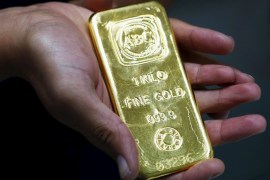 Gold, oil and copper: Is the commodity boom over?

We examine the factors dragging down commodities prices, the impact on the global economy, and the political fallout. 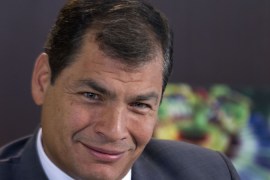 The president of Ecuador discusses whistleblower Edward Snowden’s attempt to seek political asylum in his country.